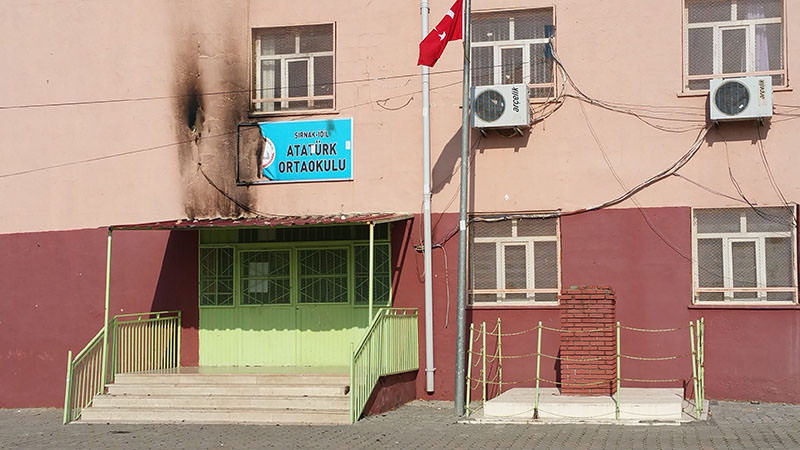 | IHA photo
by daily sabah Jan 14, 2016 12:00 am
PKK terrorists attacked eight schools and a student dormitory on Thursday morning with stun grenades, fireworks, and Molotov cocktails. The attacks were undertaken in Turkey's southeastern district of İdil in the Şırnak province.

The students and teachers who were present at the school at the time of the attack, panicked, but quickly evacuated the buildings.

In Şırnak's İdil district, intense clashes between security forces and the PKK's youth branch, the Patriotic Revolutionary Youth Movement (YDG-H) have been ongoing since the terrorist organization resumed its armed campaign against Turkey.

Accordingly, education services in many schools of the district have been stopped for over a month due to security reasons, as parents do not want their children to be stuck between fires. But, the school managers asked the students to come to school on Thursday to subject them to examinations.

It was during their test taking that the students were attacked by the PKK terrorists, as stun grenades, fireworks, and Molotov cocktails were thrown at the buildings.

There was no loss of life or injury in the attacks, but the traumatized children were reported to have left the schools screaming and in fear.

Some of the schools as well as the dormitory were reported to have been partially damaged.
Last Update: Jan 14, 2016 11:20 pm
RELATED TOPICS