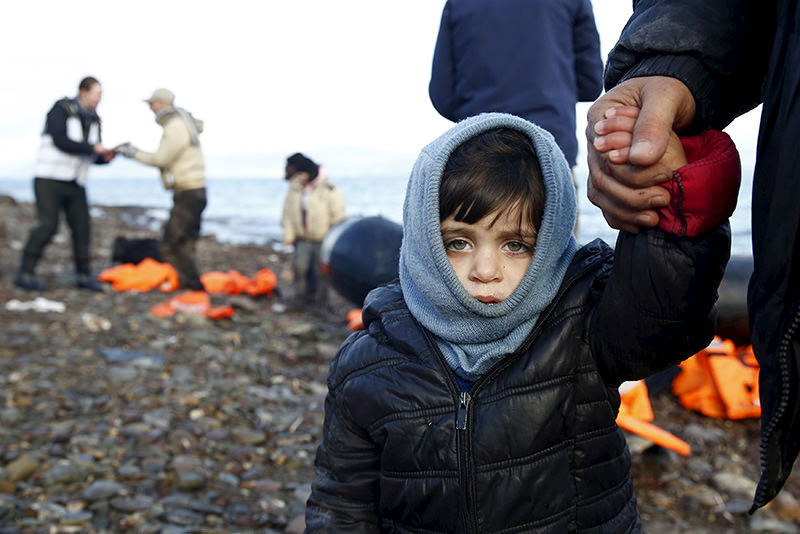 Syrian refugee child looks on, moments after arriving on raft with other Syrian refugees on a beach on the Greek island of Lesbos, Jan 4, 2016 (Reuters)
by Anadolu Agency Jan 15, 2016 12:00 am
At least four people, including three children, drowned when a vessel carrying refugees sank off Turkey's western coast on Friday, initial reports claim.

The Turkish Coast Guard dispatched rescue boats to the scene after local fishermen reported that a vessel packed with 13 refugees capsized off the Ahmetce area of Çanakkale's Ayvacık district as it tried to reach the Greek island of Lesbos, close to the Turkish coast.

Rescue squads pulled the bodies of three children from the Aegean Sea and rescued two other people, while fishermen found one female refugee drowned in the sea and rescued six more.

The eight survivors were taken to Küçükkuyu dock of Çanakkale, and then transferred to Ayvacık State Hospital in ambulances.

Another young refugee -- 14 year-old Salih Abbasi -- was rescued from the sea by coast guard teams after the survivors told Turkish officials at the hospital that they were in 13 in the vessel.

He was also taken to the same hospital in the district for medical treatment, where he rejoined with his father Ali Abbasi after the accident.

Earlier in the day, three refugee children died in a separate incident as a dinghy capsized off the Greek island of Agathonisi near to Turkey's Didim coast. According to the Greek coast guard, 20 other people were rescued from the boat.

Turkey's five Aegean provinces -- Çanakkale, Balıkesir, Izmir, Muğla and Aydin -- are prime spots for refugees leaving Turkey for the EU, with Greek islands lying within sight of the Turkish coast.

Over the past year, hundreds of thousands have made short but perilous journeys across the Aegean in a bid to reach northern and western Europe in search for a better life. Worsening weather conditions in the winter make the trip even more dangerous.

An estimated 805 people died at sea in the Aegean in 2015, according to the International Organization for Migration. More than 847,000 reached Greece via the Aegean Sea, accounting for 80 percent of the refugees arriving irregularly in Europe by sea in 2015.