PKK's latest victims, father and daughter, laid to rest side by side 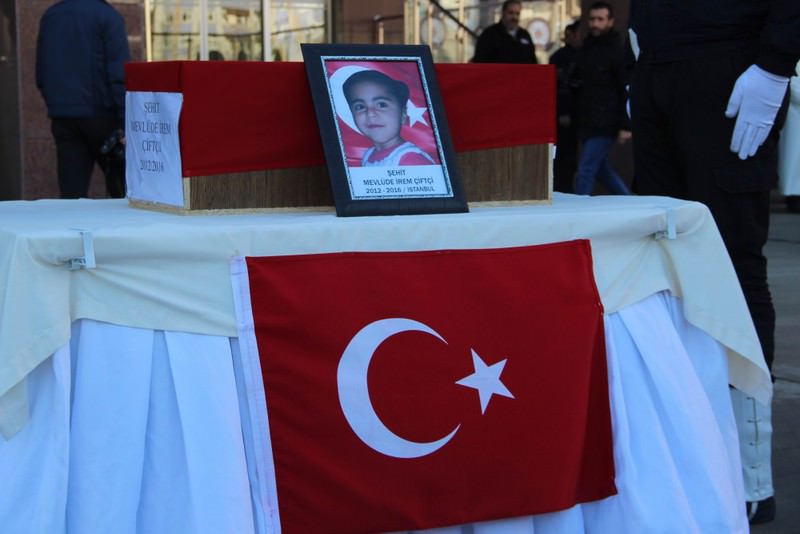 The Coffin of Mevlu00fcde u0130rem was draped in a Turkish flag at a funeral ceremony yesterday. The young girl was among the youngest victims of PKK violence which also killed 5-month-old Ecrin and her brother Murat.
by daily sabah Jan 16, 2016 12:00 am

Turkey mourns two young victims, aged 1 and 4 years old, of a deadly PKK attack in the southeast late Wednesday that marked the heightened brutality of the assaults by the PKK terrorist organization targeting security forces and civilians

Twenty-three years have passed since a photo of the dead body of an infant killed in a PKK attack sparked outrage and led to the description of the PKK as "baby killers" by nationalists. Late Wednesday, the PKK was blamed again for the killing of children including a five-month-old, in the southeastern city of Diyarbakır, revealing the terrorist organization, which shifted its focus to security forces after a long period of assaults targeting soldiers, police and civilians, is back to its old ways. 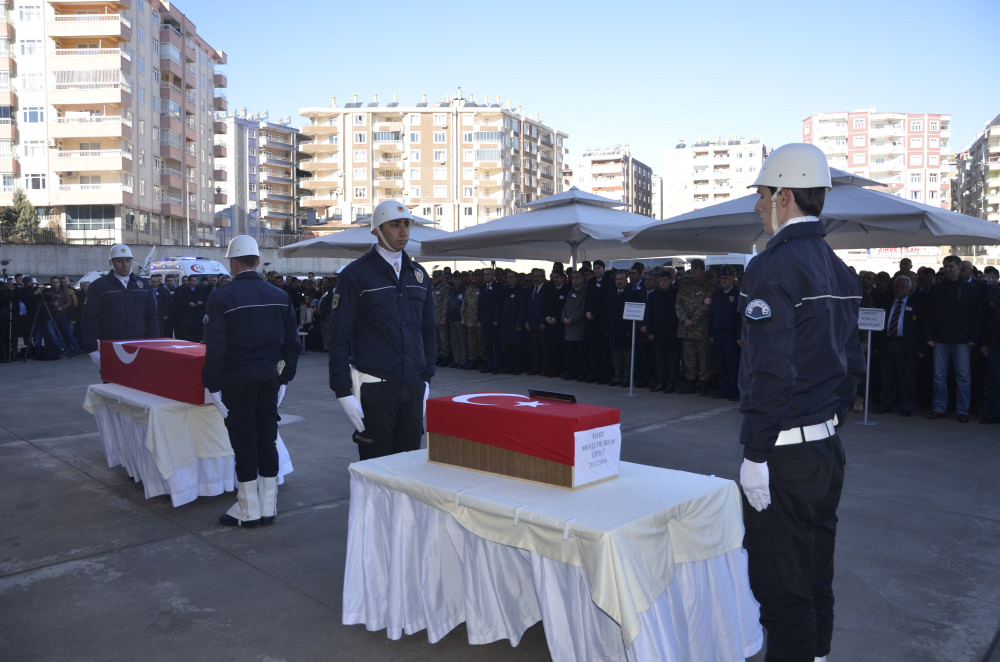 Mehmet Şenol Çiftçi, a 29-year-old police officer, was killed along with his 4-year-old daughter Mevlüde İrem when militants detonated more than one ton of explosives and opened fire at police lodgings in the province of Diyarbakır. The officer's wife was also heavily injured in the attack in Diyarbakır's Çınar district. Three members of a family living in a house near the lodging complex were also killed when the house collapsed from the explosion. The bodies of 5-month-old Ecrin, her brother Murat, 10, and their father Lokman Açıkgöz were recovered from the rubble. Esra Başaran, a civil servant who was staying at the lodgings, was also among the victims of the attack, which injured 39 others.

Lokman Açıkgöz and his children were buried on Thursday amid the wailing of surviving family members and friends. The small coffins of Ecrin and Murat carried by pallbearers moved everyone to tears and led to a renewal of outrage against the atrocities of the terrorist organization, which is responsible for hundreds of deaths since last summer. On Friday, another small coffin, this time containing the body of Mevlüde İrem, accompanied her father's coffin. Parents of the police officer, relatives, Cabinet ministers, police chiefs and generals attended a funeral ceremony at the police headquarters in Diyarbakır where Mehmet Şenol Çiftçi worked. Draped in a Turkish flag, Mevlüde İrem's coffin was placed next to the coffin of her father as his colleagues described him as "a martyr" in the fight against terrorism in eulogies. The young officer was deployed in Diyarbakır four years ago when the PKK significantly scaled down its attacks targeting security forces and subsequently announced a unilateral truce in the wake of a reconciliation process started by the government to end the terrorism. However, it canceled the truce last summer and since July has stepped up its attacks especially in southeastern Turkey, which is predominantly Kurdish.

The PKK was conceived by a group of militants claiming to fight for Kurdish self-rule in southeastern Turkey in the late 1970s and emerged as the main enemy in Turkey's counterterrorism efforts in the 1980s. The group does not claim responsibility for attacks involving children or civilians in general, but authorities accused the PKK of perpetrating such attacks, including an infamous incident in the eastern city of Siirt in 1993. Saime Erdem was 9 months old when suspects linked to the PKK raided a village and killed 22 people, including the infant. The image of the baby girl with a bullet wound in her body made the headlines and aggravated the crackdown on the terrorist organization.

Mevlüde and her father are not the latest victims of the terrorist organization as a police officer was killed in a counterterrorism operation in Siirt on Friday. Yet she and Ecrin will likely be remembered as much as the police officers and troops killed by the PKK due to their ages.

President Recep Tayyip Erdoğan was among those who condemned the PKK and its supporters. Speaking to reporters on Friday, Erdoğan focused his rhetoric both on the PKK and a group of academics who drew his ire for a joint declaration protesting Turkey's anti-PKK operations. "I wonder what they will say about Mevlüde and other children. These are cruel people since they act in support of those oppressing the people," Erdoğan said. "We are fighting a terrorist organization seeking to benefit from troubles Turkey faced," he said. His remarks come at a time of a major sweep against the militants in southeastern Turkey where curfews are imposed occasionally to wipe out militants hiding in residential areas.
RELATED TOPICS