UNCHR head praises Turkey's open-door policy, urges other countries to do the same 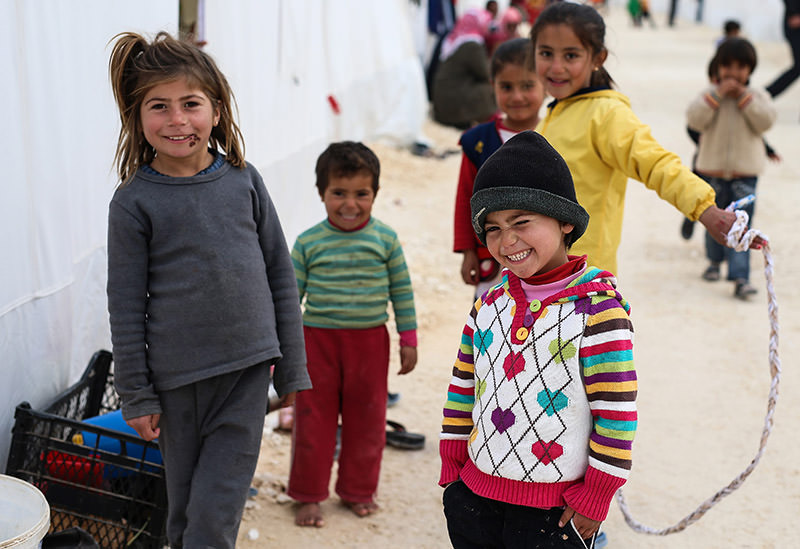 A Friday, Jan. 30, 2015 file photo showing Syrian refugee children who fled violence in the Syrian city of Ayn al-Arab or Kobani seen outside their tent in Turkeyu2019s newly set-up camp in the border town of Suruu00e7 (AP Photo
by Daily Sabah with Agencies Jan 16, 2016 12:00 am
The head of United Nations' refugee agency on Saturday has praised Turkey's open-door policy and said that the agency will seek additional resources for Turkey, the world's largest host of refugees, and push for more resettlement, as the war in Syria is set to enter its sixth year.

Speaking at Istanbul's Atatürk Airport before leaving Turkey, Filipo Grandi, the U.N. High Commissioner for Refugees (UNHCR), also cautioned against anti-refugee sentiment. A suicide bomber with links to Daesh killed 10 German tourists in Istanbul this week after registering as a refugee, according to Turkish officials.

Hailing Turkey's open-door policy for refugees, Grandi said that Turkey sets an example to the whole world on how to deal with the ongoing crisis, while he urged all countries to do the same. "We see some countries that are hesitant" the UNHCR head said, and added that the situation is critical.

The UNHCR has called for a "massive resettlement" of Syrian and other refugees within Europe to distribute hundreds of thousands of people who are part of the largest movement of refugees since World War Two.

"We will do whatever we can to help the Turkish government find additional resources for people who are living here under temporary protection to make their lives as good as we can," Grandi, who took the helm at the UNHCR this month, told reporters in Istanbul.

"We will work on other aspects as well ... We will work on more resettlement opportunities," he said after meeting refugees at camps near the Syrian border in his first visit as commissioner at the agency.

Grandi said it would be "dangerous" to fear refugees after it was revealed that Nabil Fadli, a Syrian who blew himself up in Istanbul in a crowd of German sightseers this week, had fought with Daesh before registering with authorities in Istanbul on Jan. 5, officials said.

"What would be dangerous would be to generalize and to say that because one or two refugees, or even 10, have done something wrong ... all refugees are terrorists or criminals. The overwhelming majority are not," Grandi said at a news conference after meeting Prime Minister Ahmet Davutoğlu.

About 10 percent of the 2.2 million Syrians sheltering in Turkey stay in camps. The rest try to make ends meet in cities around the country, often working illegally for a fraction of the minimum wage.

Otherwise, refugees depend on aid organizations' handouts or must beg for money, he added.

Only 7,300 work permits have been issued to date, officials said.

Turkey has spent more than $6 billion on hosting Syrians and Ankara criticizes the international community for spending so little on Syrian refugees and not admitting more asylum seekers from Syria.
Last Update: Jan 16, 2016 9:59 pm
RELATED TOPICS