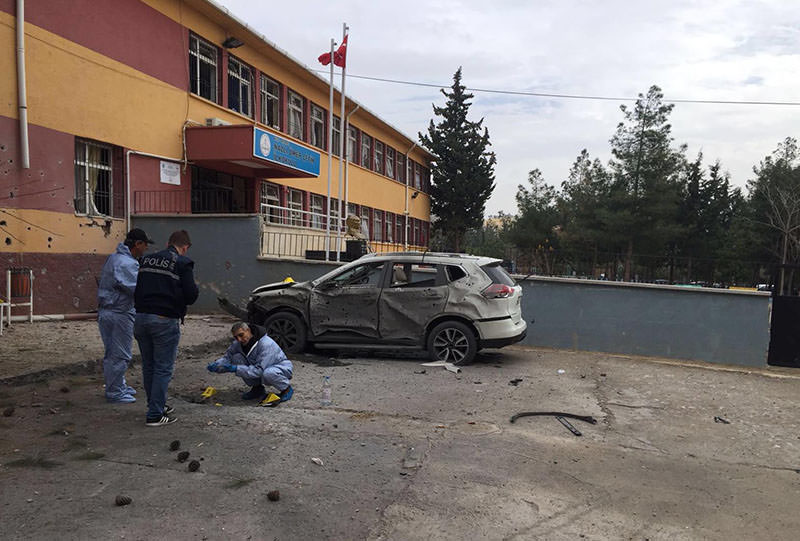 | AA photo
by daily sabah Jan 18, 2016 12:00 am
One person died, three others were injured after an explosion at a middle school in the border province of Kilis in southeastern Turkey on Monday.

A school janitor died from her injuries following the explosion at Eyüp Göçe İmam Middle School, reported the officials. She worked at a primary school that formed part of the same complex of four schools, according to a statement from the provincial governor's office.

Another three wounded people, including at least one female pupil, are still being treated at Kilis State Hospital.

"A female janitor working at Nazlı Ömer Çetin Primary School died in the blast, while a female seventh grade student in the other school was taken to Kilis State Hospital and is under surgery," the governorship said.

In a later statement, Kilis Governor Süleyman Tapsız said that the incident was not a terror attack but a stray missile.

"It is not terror incident as no person or institution was targeted, it was only a stray missile," he told a press conference at his governmental office.

The governor said the student, Gülten Canpolat, underwent a medical operation at Kilis State Hospital, and was transferred to the intensive care unit while the injured teacher was discharged from the hospital after receiving ambulatory treatment.

Tapsız cited the escalating clashes - for the past three days - between different groups on the other side of the Syrian border as reason for Monday's attack.

The governor stressed that the Turkish border units were on alert and that they had made retaliation shots in the area where the missile was thought to have been fired -- a Daesh-held area 20 km from the border according to the estimates.

The Minister of Transport, Maritime and Communication, Binali Yıldırım told private news channel NTV that the blast was caused by three Katyusha rockets launched into the area. Military sources said that the rockets were launched by Daesh-controlled region in Syria, and after the Turkish miltiary determined the points the rockets were launched from, they retaliated with fire, according to a news report published by the NTV.

Turkish territory has often been hit by artillery fire as the Syrian civil war rages just a few kilometers to the south. Such incidents are usually answered with retaliatory fire from the Turkish army.

The mayor of Kilis province, Hasan Kara had told NTV early in the morning that the explosion was caused by three mortar shells that were "most probably" fired from the south.

He had said a mortar had landed on the Eyüp Gökçe İmam middle school's garden [located about 10 km away from the Syria-Turkey border], whereas another had landed on empty land nearby. But later on in the day, these reports were revised as officials said that mortar shells could not target places kms away.

Education services at all nearby schools are currently suspended.

Several rescue teams and ambulances have been dispatched to the school amid reports that the province governor Süleyman Tapsız was also present in the area.

The force of the blast seems to have splintered the trunk of a tree and severely damaged a vehicle.

Last week, Turkey was hit by a suicide bomber who killed ten tourists in Istanbul as well as a car bomb detonated outside a police station in Diyarbakır province, which killed six. The latter was carried out by PKK terrorist while the Istanbul attack has been blamed on Daesh.

Developed by the Soviet Union, Katyusha rocket launchers are common in the inventories of Iraqi and Syrian armed forces.
Last Update: Jan 19, 2016 3:38 am
RELATED TOPICS