4 Airline companies cancel 223 domestic, international flights to and from Istanbul 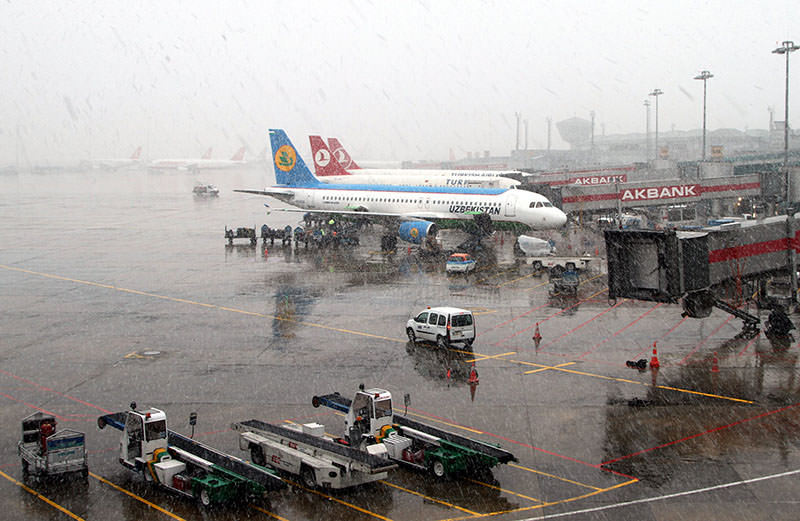 | AA photo
by Daily Sabah with AA Jan 19, 2016 12:00 am
Turkish Airlines (THY), Pegasus Airlines, Onur Air, and AtlasGlobal Arlines have cancelled a total of 223 flights to and from Istanbul on Tuesday, due to unfavorable weather conditions.

The heavy snowfall that hit Istanbul on Monday subsided on Tuesday, but as stormy and rainy weather was continuing, THY cancelled 151 domestic and international flights at the city's two air hubs, Atatürk Airport and Sabiha Gökçen Airport, while Pegasus canceled 65 flights, AltasGlobal 13, and Onur Air 4.

The companies advised their passengers to check the status of their flights by calling customer service or visiting their websites.

Meanwhile, up to 1.4 meters of snow have accumulated in the famous Uludağ skiing center of Bursa province. In certain eastern provinces, snow accumulation reached up to 25 centimeters.

Heavy snowfall made a comeback on Monday in Istanbul and northwestern Turkey after a couple weeks of relatively warmer weather. With temperatures dropping to zero degrees Celsius and below, daily life was affected in Turkey's most populated city.

The snowfall was not as severe as it was two weeks ago, but road crews were nevertheless deployed on the main roads across the city to keep them clear of snow and ice. The Istanbul Metropolitan Municipality said on Monday more than 5,000 crew members were working along with hundreds of snowplows to keep Istanbul's streets free of snow and ice.
Last Update: Jan 19, 2016 5:58 pm
RELATED TOPICS