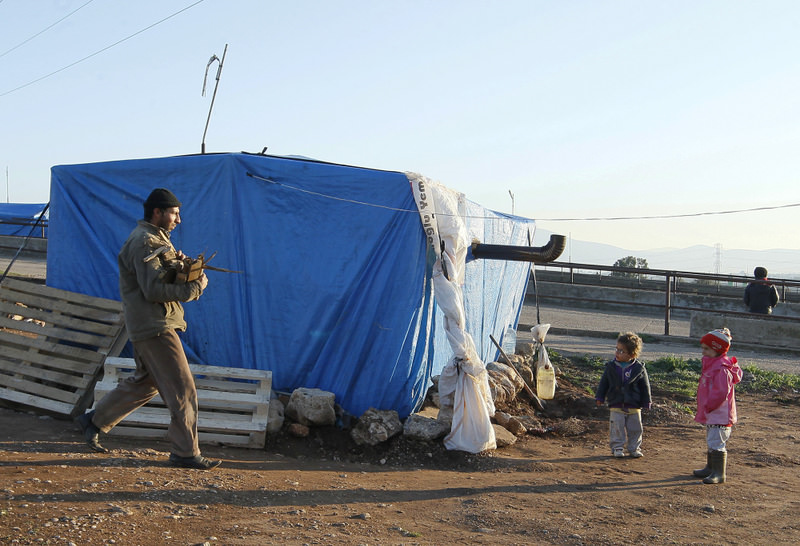 Ibrahim Abdelazez al-Khidr carries firewood to the tent while his two daughters stand outside.
by Daily Sabah with AA Jan 21, 2016 12:00 am

As winter takes hold in western Turkey, Syrian refugees living in makeshift tents struggle to keep warm on cold nights in the city of İzmir where many migrants leave for nearby Greek islands

Blue nylon tents scattered across a vast stretch of empty lands is the first sign of deprivation of their occupants. But it gets worse when you enter one of them. Apart from worn-out rugs and sometimes cardboard used as a substitute, they are barely furnished and have no heating source other than a primitive firewood stove.

This is how some 500 Syrians in the western city of İzmir will spend the chilling winter. İzmir is also the city where dozens of migrants arrive and leave every day to reach nearby Greek islands with the hope of a better life in Europe.

In the districts of Torbalı and Bayındır, Syrian families, thousands of kilometers away from their homeland, which was wracked by an ongoing conflict, struggle to keep their makeshift tents warm with no access to electricity or water. As temperatures drop to below zero degrees Celsius at nights, they huddle around the stoves while winds creep into bare tents.

Men work at temporary jobs while women are mostly housewives, caring for children who have little to wear. The only aid they can find is donations by local charities occasionally bringing food, medicine and blankets. Though Syrians have access to medical services in Turkey, many are unable to go to hospitals far from their primitive settlements. Children are particularly vulnerable to seasonal influenza as well.

Ibrahim Abdelazez al-Khidr lives in one of those tents with his wife Shamsa, their daughters Batul, 2, and Zeinab, 3. The family hails from Hassakeh, a city in northeastern Syria near the Turkish border that has been rocked by clashes between almost all parties fighting in the brutal conflict - from DAESH and Kurdish militants to regime forces. "I have to survive for my children," al-Khidr said. "There was war and death in Syria. Many people died because of the war between DAESH and the PYD [Democratic Union Party]," he said, referring to the Syrian Kurdish militant group. "Bombs were raining down on our neighborhood. I wanted my children to live in a safe place, so I came to Turkey," he said. Al-Khidr works in whatever jobs he comes across but he is mostly unemployed. The family lives off the little aid they receive, but their primary concern for now is the unforgiving cold weather. "I want my family to stay warm but it is too difficult," the father said, pointing to the little fuel available for the stove. "I wonder how we will survive this winter," he grimly added.

Turkey hosts nearly 2.5 million displaced Syrians who flocked to the country after the unrest that evolved into a civil war started in Syria five years ago. Some 269,000 Syrians reside in 25 refugee camps near the Turkish-Syrian border, and the majority lives in houses they rented or purchased in the country. Families like al-Khidr's, who arrived in Turkey with little money or possessions, are forced to live in squalor, in makeshift tents or abandoned buildings. Charities from Turkey and abroad reach out to impoverished Syrians, but they acknowledge it is an insurmountable task to help all refugees. The state spent $8 billion looking after refugees, but the government complains of the lack of international aid to address the refugees' needs.