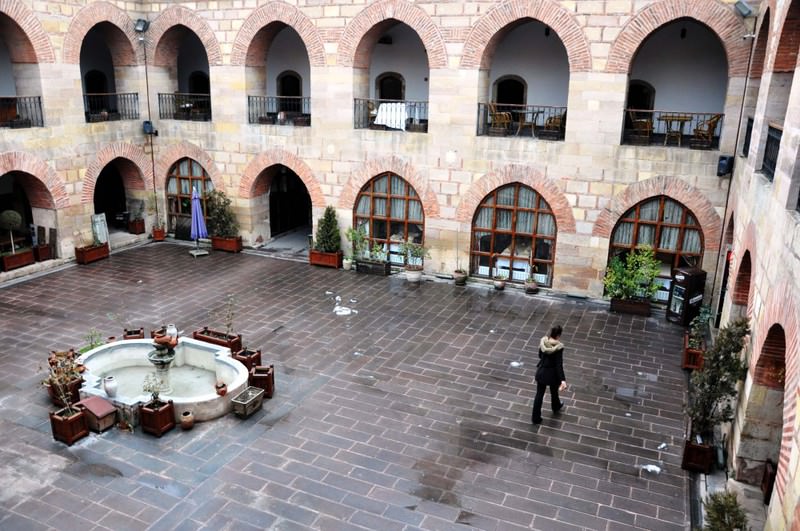 by Anadolu Agency
Jan 25, 2016 12:00 am
The historical Kurşunluhan Inn in Kastamonu, built nearly 600 years ago by Kemalettin İsmail of the Isfendiyarids, waits to be officially registered as the oldest hotel in world. The building is one of the most important historical structures in the region and was built in 1443 by the uncle of Ottoman Sultan Mehmed the Conqueror, Kemalettin İsmail, and has been serving as an inn for the travelers ever since. The inn was originally built as a part of the Islamic social complex, or kulliye, named after Kemalettin İsmail.

Karadeniz Hotel Management rented the building from the General Directorate for Foundations in 2004 and undertook restoration works. Following renovation, the inn opened its doors to travelers and tourists in 2008. The building, which is in harmony with the architecture of Kastamonu as well as other historical buildings in the city, also operates as a museum as well as a hotel. With its 26 rooms, restaurant and a huge lobby, the complex still offers its services to its guests and continues to amaze modern man with its architecture. The inn is decorated with Kastamonu wood and handicrafts. While restoring the building, the rooms with domes were protected in order to remain faithful to the original structure of the building.

Cem Dilimer, the president of the Kastamonu Tourism Employers Association and Kurşunluhan manager, underscored that Kurşunluhan stands out because of its historical background and said, "Kurşunluhan is one of the rare buildings which was originally built for accommodation and still operates as a hotel. As far as we know, it is the oldest hotel still operating in Turkey, as well as in Europe."

The hotel management is readying to submit their application to the Ministry of Culture and Tourism for further investigation of their claim. "Authorities will investigate our claim from a technical point of view. There are many historical buildings around the world, but the important thing is the date when they were converted into hotels," said Dilimer. He said the historical documents recorded by the women of the time reveal who used Kurşunluhan as an inn back in the day, and added that the history of the building lies in the archives. Highlighting that Kurşunluhan should be passed onto future generations as an inn, Dilimer continued, "With its 600 years of history, Kurşunluhan Inn is an important historical and cultural value of the region. The inn won 'The Best Historical Place' Award of Skal in 2014. Kurşunluhan is the oldest operating hotel in Europe and we aim to register it as the oldest still operating hotel in the world. We are currently investigating the archives to find evidence. We will submit our application to the Ministry of Culture and Tourism in a very short time."