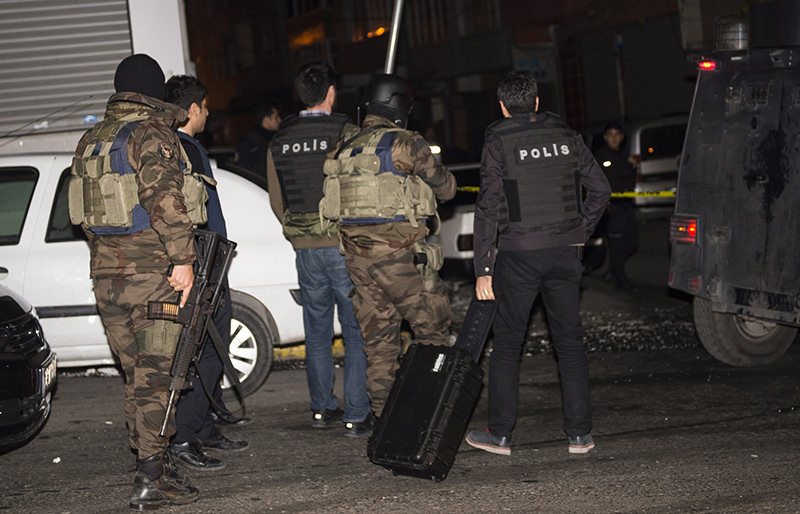 | File Photo
by Compiled from Wire Services
Jan 25, 2016 12:00 am
The Turkish National Police's counterterrorism units on Monday detained 11 people in dawn raids across the capital Ankara on suspicion of links to the Daesh terrorist organization. The suspects are accused of recruiting new members for the militant group operating in Syria and Iraq, two of Turkey's neighbors.

Turkey has detained 3,318 people as part of efforts against Daesh and other terrorist organizations since they emerged in Syria a few years ago and arrested 847 out of the 3,318 suspects, according to the Interior Ministry.

In the capital Ankara, two would-be suicide bombers and a number of suspects accused of aiding them were detained in December before the New Year celebrations when they planned to strike.

Daesh was blamed for the suicide bombing on Jan. 12 in Sultanahmet Square that killed 10 German tourists.

Turkey has had its share of attacks by the terrorist organization in the last year. The first major attack was on July 20 in Suruç, a town in the province of Şanlıurfa located on the Turkish-Syrian border. A suicide bomber linked to the terrorist group blew himself up amid a large crowd attending a rally organized by several nongovernmental organizations. Thirty-two people were killed in the attack.

As Turkey reeled from the Suruç attack, a second attack blamed on Daesh occurred on Oct. 10 when two suicide bombers linked to Daesh blew themselves up at a peace rally. Over 400 people were injured and 102 people were killed in the attack, the deadliest in the history of the Republic of Turkey.

Turkey is among the primary targets of the terrorist organization, which controls towns near the country's border with Syria, for its contribution to the campaign against Daesh. Earlier this month, some 200 Daesh members in Syria were killed by artillery fire from the Turkish side in retaliation to the Sultanahmet bombing.

Security forces also captured two suspected Daesh members who were traveling to Turkey from Syria illegally through the border in the southern town of Kilis on Monday. The Turkish army said the unidentified individuals were accompanied by two children.