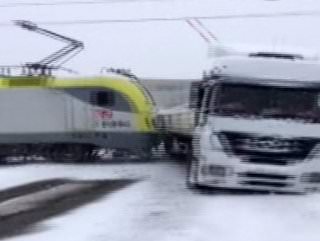 A train struck a truck Tuesday at about 11:30 a.m. local time at a grade crossing in Çezerköy, Tekirdağ province located in northwest Turkey, officials said.

Mahmut Özdemir was the truck driver who was reportedly trying to give way to another vehicle when his truck became stuck on the crossings.

The driver of the truck got out of the vehicle before it was hit by the high-speed train.

The train conductor could not stop and subsequently collided with the truck at a high rate of speed.

There were no injuries reported in the accident.

Train service has been suspended as crews work to clear the area.