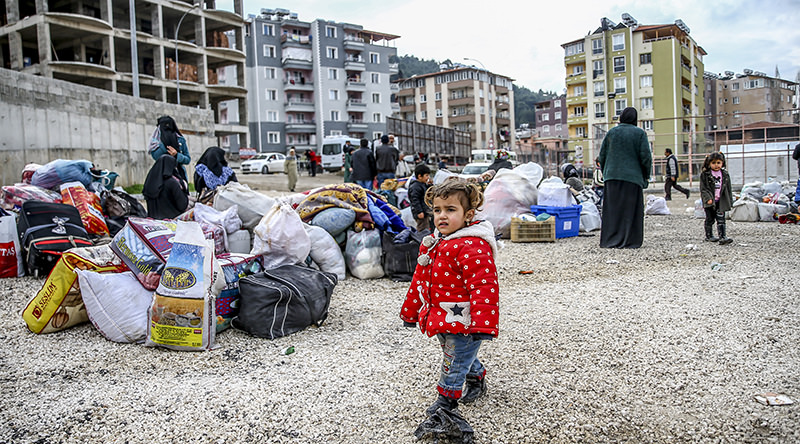 | AA Photo
by Daily Sabah with Reuters Feb 01, 2016 12:00 am
Over 3,000 Turkmens and Arabs, fleeing from the advancing forces of the Assad regime in the north of the province of Latakia, have crossed into Turkey over the past three days, said Turkey's Disaster and Emergency Management Authority (AFAD) on Sunday.

A Turkmen official said several thousand more refugees were expected, as a camp, which mostly sheltered Turkmens near the Syrian village of Yamadi, has been evacuated, following an advance by pro-Assad forces backed by Russian air strikes.

"After the attacks have spilled over to the Yamadi camp, the first group of 731 refugees, mostly babies, children, women and the elderly, entered our country," AFAD said in a statement.

A total of 3,120 people have already crossed through Pulluyazı, a village near the border town of Yayladağı, in Hatay, a province in southern Turkey.

AFAD has said that some of the refugees have been transferred to AFAD-run camps in the provinces of Hatay, Gaziantep and Şanlurfa, while others are finding their relatives, thanks to biometric registration processes.

The refugee influx has accelerated since Jan. 24, when the rebel-held town of Rabiya, in the Syrian province of Latakia, was captured by forces loyal to the Assad regime.

"There was an attack by Russians on the camp over the weekend," a Turkmen official at Yayladağı said. "Thankfully their bomb did not fall right at the heart of the camp, but 40 people were still wounded. A lot of towns and villages in the north of Latakia have already been emptied. But, there's still another 3,000 to 4,000 civilians there who haven't left."

AFAD said more than 150 refugees have been placed at a new camp in Güveçci, on the Turkish side of the border, while others have been sent to refugee camps in the Turkish provinces of Gaziantep and Şanlıurfa, which lie along the border with Syria. Some have found refuge with relatives.

The Turkmens are an ethnic kin to Turks, and Turkey has been particularly angered by Russia targeting them in Syria. Russia's actions in Syria risk exacerbating a refugee crisis, at a time when Turkey has just struck a deal with the EU to stem the flow of refugees to Europe.

AFAD has provided over 500 million Turkish liras in humanitarian aid to Bayırbucak Turkmens, and says it is committed to continuing to provide support for Turkmens seeking refuge in Turkey.

AFAD works collaboratively with the Turkish Ministry of Health, Gendarmerie General Command, the Turkish Red Crescent, and other institutions.