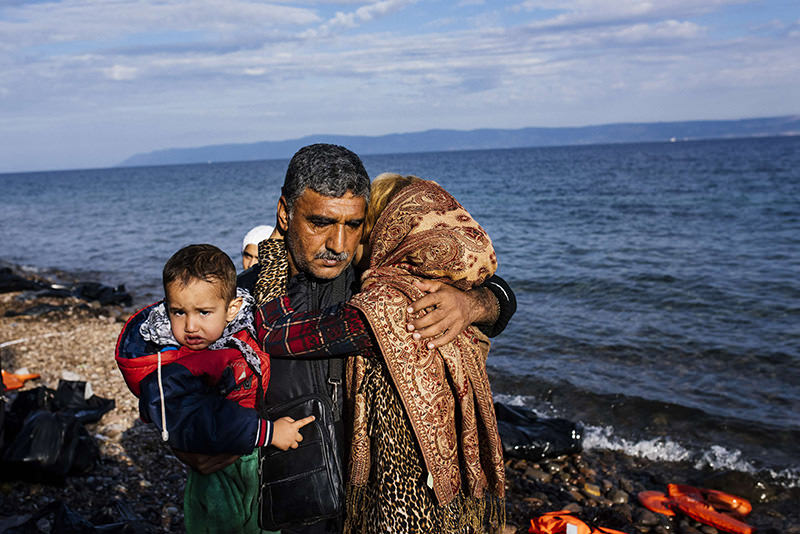 Representational photo: A family reacts shortly after arriving with other refugees on the Greek island of Lesbos on Oct 12, 2015 (AFP)
by Daily Sabah with DHA Feb 02, 2016 12:00 am
Casualties continue to pile up off Turkey's Aegean coast with more refugees seeking to reach Europe. At least nine people, including two toddlers, drowned on Tuesday when a boat carrying refugees capsized off the coast of Seferihisar, a district of the province of İzmir in western Turkey.

Migrants, all Syrian, had departed Cape Doğanbey before dawn, shortly before they asked for help from the Coast Guard. Coast Guard officers found a fiberglass boat only 25 meters off the coast when they arrived at the scene. The boat was submerged and two survivors afloat near the boat were rescued. The bodies of nine migrants were discovered at the scene while 11 other survivors managed to swim to shore on their own. The Coast Guard was still combing the sea for other potential survivors, as the survivors were not aware of the total number of people who boarded the small boat. The victims were attempting to reach Samos, a Greek island that lies a few sea miles from the coast.

The tragedy comes after Saturday's incident in a stretch of the Aegean Sea between the town of Ayvacık, north of Seferihisar, and the Greek island of Lesbos. At least 37 migrants including toddlers and children of various ages drowned after their boat crashed into rocks and capsized.

According to International Organization for Migration (IOM) figures, 806 people died last year as they attempted to cross into Europe via the Aegean. The death toll in the Aegean Sea in January alone was 218 people. Thousands of migrants arrived in Europe through the maritime route from Turkey last year, and more than 62,000 people entered into Greece from the Mediterranean in January, the IOM said.

Though İzmir lies in a relatively warm part of Turkey, strong winds in the Aegean Sea makes even a short journey to the Greek islands dangerous. Migrants usually take rubber dinghies to the islands, which succumb to bad weather conditions, overcrowding and occasionally sink. However, media reports suggest migrants – or rather smugglers organizing their trips – now turn to creating lifeboats from discarded vessels. A report by Doğan News Agency (DHA) said the lifeboats are becoming more popular since they are safer than rubber boats, cheaper than larger tourist boats and built to sustain bad weather and overcrowding. İzmir, a popular destination for migrants due to its proximity to the Greek islands, is also a hub for ship dismantling and recycling. According to officials, lifeboats are sold by recycling companies and smugglers purchase them from third parties. Authorities stepped up measures to prevent use of lifeboats for illegal crossings, and lifeboat sales are now under scrutiny.

A DHA investigation found lifeboats used by migrants were obtained from shipyards in İzmir's Aliağa district. As a result, the local governorate issued new regulations limiting their sale and acquisition. A Coast Guard permit will be required to purchase such boats in the future, and Coast Guard officials will be responsible for examining the purpose of use as well as the end users of the boats. Officials at an association of ship recycling companies said easily traceable sales records for lifeboats make it difficult for smugglers to use them.
Last Update: Feb 02, 2016 3:59 pm
RELATED TOPICS