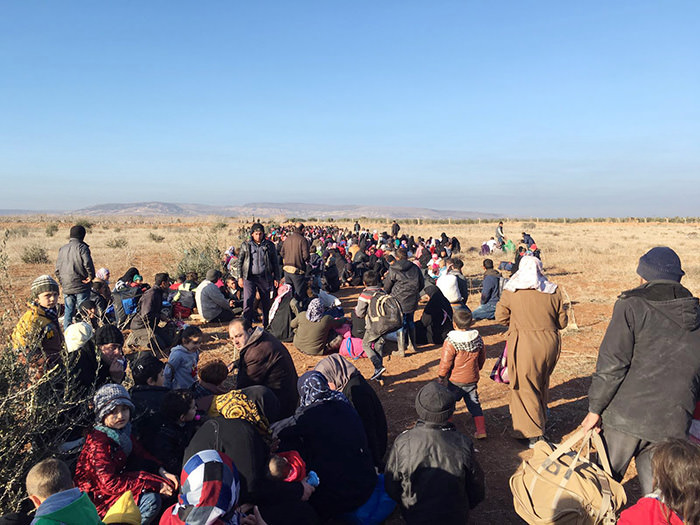 Turkey Syria border near Kilis province (IHA Photo)
by Daily Sabah Feb 05, 2016 12:00 am
Turkish Red Crescent chairman Ahmet Lütfi Akar said on Friday that the organization has completed its preparations and is ready to serve the new wave of refugees escaping the Russian and Syrian regime airstrikes on civilians in Aleppo, Syria.

"There is a new human tragedy being lived in Syria. We are facing a new wave of refugees. As the Red Crescent, we have made all the preparations to do all the necessary work," Chairman Akar said.

"Turkish Red Crescent teams have been serving on Turkey's Syrian borders for the past five years. Our teams know what can be done for our Syrian guests," he added.

Akar also said that the Turkish government has appointed the Red Crescent to be responsible for the nutritional purposes and four truck loads of nutritional aid has been served in the first phase.

The chairman also called for the channels and routes in Syria to provide aid to civilians should be kept open to avoid humanitarian disasters.

Nearly 110,000 refugees headed toward the Turkish-Syrian border following offensives by the regime forces of Syria's Bashar Assad against western Aleppo, which has continued for the last week with the support of Russian airstrikes. Increased Russian involvement in Syria has turned the refugee problem into more complicated to address.

Thousands of people, including Turkmens, have fled their homes located around Azaz, a town 7 kilometers away from the Turkish-Syrian border in northwestern Aleppo, and around 70,000 people now live in the 10 different refugee camps built by the Disaster and Emergency Management Authority (AFAD) on the Syrian side of the border. Moreover, 10,000 Syrians are waiting at the Öncüpınar border crossing in the southeastern province of Kilis to cross into Turkey.