Volunteers reach out to desperate migrants on Aegean shores 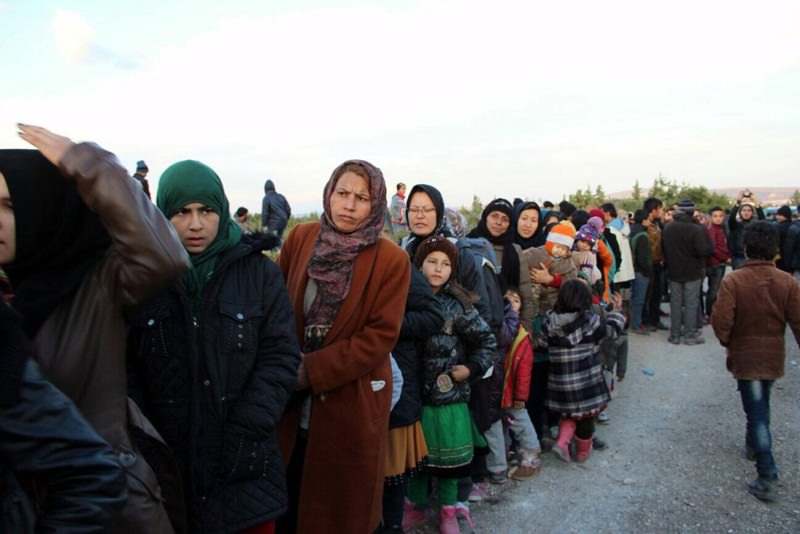 Migrants wait as volunteers deliver food and clothes to a group near a beach where migrants depart for Greece.
by Daily Sabah with AA Feb 05, 2016 12:00 am

As migrants from various regions prepare to travel into uncertainty and perhaps narrowly escape death on the Aegean Sea on their journey to Europe, volunteer groups have sprung to action to help provide shelter and food for migrants and, for the sadly unsuccessful, proper burial

Turkey's western shores are swarmed with hundreds of migrants every day as wars and poverty have driven people from across the globe to the country, a gateway to Europe and the nearest destination for those from the Middle East and Asia in pursuit of better lives.

Though Turkey is praised for the aid efforts it has been making for migrants, especially Syrians, it is difficult to stem the flow of people heading to Europe. This is where volunteer groups step in, as migrants are forced to live outdoors while they await the next boat to take them to Greek islands in the Aegean Sea.

One volunteer group in the western town of Çeşme in İzmir province call themselves the "İmece Initiative," after the Turkish tradition of collective collaboration to help other members of the community in need. They hand out food, clothes and blankets to migrants who take shelter in parks, forests and abandoned buildings in areas near the beach where they intend to depart for Greece. 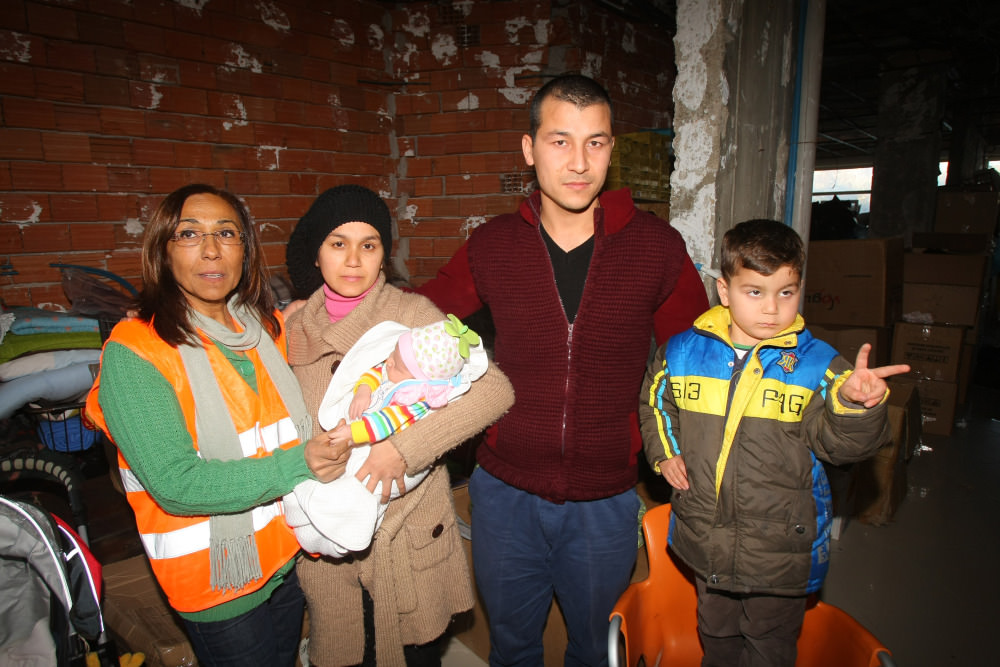 Birnur Eser (far left) helped Azade Huseyni (second from left) and her family when the young woman delivered a baby the day she was about to board a boat before Eser convinced her to stay.

One group repairs the broken windows of old houses migrants temporarily reside in, while another group delivers food and blankets to provide protection from cold winter nights; a major threat for migrants who embark on potentially lethal journeys at sea. The initiative is the brainchild of a few university students, and it soon garnered a considerable following among locals embracing the refugees whose numbers have dramatically increased over the last two years as the civil war in Syria has worsened.

Uğur and Arzu Ünsal, a couple living in İzmir, are among the volunteers of the Çeşme İmece Initiative. The couple hosted a Syrian family rescued from a sinking boat off the Turkish coast in December and covered the expenses for a proper burial of the family's 5-month-old baby. They are now taking care of 3-month-old Shervan, another child of the Solah family, who suffered from hypothermia and remains in intensive care at a hospital in İzmir.

The Syrian family of nine from Aleppo had arrived in İzmir in December, along with 21 others. The boat they boarded sank due to bad weather. Other family members survived and were hospitalized. The Ünsals took care of their every need during their stay in hospital and accommodated them in their own home.

"They were planning to travel to Germany where their relatives live but their boat sank. They stayed with us for about one month. We helped them find a grave for their baby and we helped them during Shervan's treatment. The child is still in the hospital, but they decided to try again [to cross into Greece]. They told us before leaving, 'We entrust Shervan to you,'" Uğur Ünsal told Anadolu Agency (AA).

The Solahs tried their luck on the land route to Germany twice but they failed both times, Ünsal said. The Syrian family is now in Istanbul, awaiting another opportunity to cross into Europe. It is unclear whether the family will return to take Shervan, but the Ünsals are determined to adopt him once he recovers.

Birnur Eser is another volunteer who probably saved the life of a child when she noticed that an Afghan woman who was preparing to cross to the Greek islands was having labor pains. Azade Huseyni, a 22-year-old woman, was traveling with her husband Jawad and their 4-year-old son Muhammad. The family was waiting for a boat to the Greek island of Chios when volunteers from the İmece Initiative visited a group of migrants near the beach to hand out food. Eser was among the volunteers and saw the young woman was about to give birth. But the Afghan migrants were determined to board the boat anyway. After a long conversation, Eser finally convinced the family to go to a hospital and helped them get there.

The mother gave birth to a baby girl at the hospital where Eser accompanied them. The family named the girl after Eser. Jawad Huseyni told AA that they spent all they had to sneak into Greece and had no money to give birth at a hospital. "We decided to stay when Birnur persuaded us. I thank her and others who helped us with everything we needed during the birth and afterward. Birnur also let us to stay in her home. She is more close to us than our own family back in Afghanistan," he said.

"I hope they won't leave again. They can stay here in my home as long as they want. I already have three children, but now I have two more and I have two grandchildren too," Eser said, pointing to the new member of the Huseyni family. She said she would help the family obtain a work permit for Jawad in order for them to extend their stay in Turkey.

The initiative already has a counterpart on the Greek side of the Aegean Sea. Based in Chios, a volunteer group embraces migrants arriving from the Turkish coast, delivering humanitarian aid to them. Pothiti Kitromilidi, a member of the Chios Volunteers Association, said they occasionally cooperate with Turkish volunteers.

The Greek group soon expanded its membership with volunteers from all over Europe, who help with the delivery of food and clothes to migrants who succeed in reaching the island.

Kitromilidi told AA that they regularly patrol the sea for new arrivals. "We notify [the Greek coast guard] if they are stranded or their boat is sinking and recover them from the sea," Kitromilidi said. He added that their members sometimes travel to Çeşme to help Turkish volunteers. "Our sole purpose is to make migrants feel they are not alone," he stressed.
RELATED TOPICS