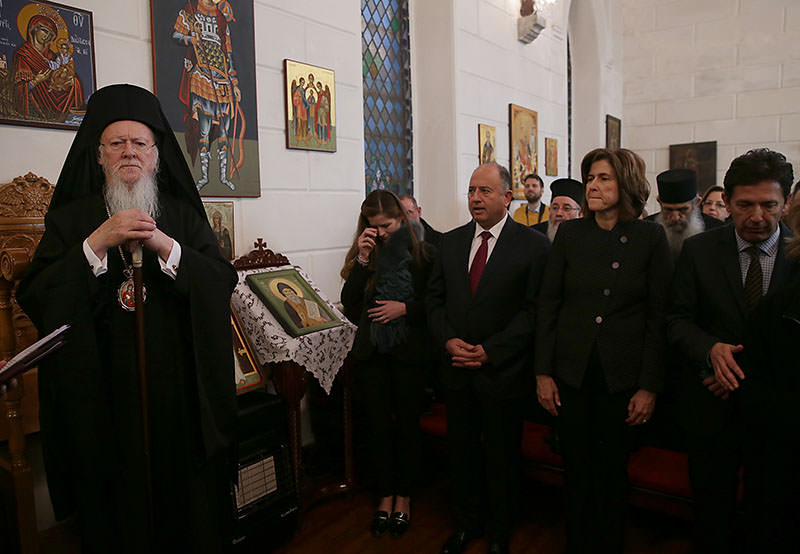 | AA photo
by Daily Sabah Feb 07, 2016 12:00 am
Bartholomew, the head of the Fener Greek Patriarchate, which oversees Orthodox churches around the world, was in the western city of İzmir on Sunday for a week-long trip for which he arrived on Friday. The senior cleric led a religious service in the Aya Fotini church and imparted messages of peace.

Accompanied by the Greek ambassador to Turkey, Kyriakos Loukakis, members of the Greek Orthodox community in Turkey and Greece and other countries, Bartholomew addressed the faithful at the church in İzmir's Alsancak district.

Speaking to reporters after the religious service, Bartholomew highlighted the plight of Syrian migrants who depart for Greece from the shores of İzmir but often end up dead in perilous sea journeys. "We hope everyone will extend a helping hand to end this war. If it does not end, there will be more waves of migration and more and more people will die," the patriarch said.

Bartholomew also expressed his pleasure at a planned meeting in İzmir between Greek Prime Minister Alexis Tsipras and his Turkish counterpart Ahmet Davutoğlu. "I hope they will be in agreement on every issue they discuss. Their meeting will certainly be to the benefit of two countries both on political issues and in improving tourism and commerce," he told reporters.

Greece and Turkey have a history of hostilities dating back to World War I and Turkey's war of independence during which İzmir was occupied by Greek forces. The two countries' disagreement on territorial waters in the Aegean Sea and on Cyprus, the Mediterranean island divided between Greek and Turkish Cypriots, are among issues keeping the relations strained. However, Turkey and Greece hope to revive the stalled relations following last year's elections in Greece that brought left-leaning Tsipras to power.
Last Update: Feb 07, 2016 5:25 pm
RELATED TOPICS