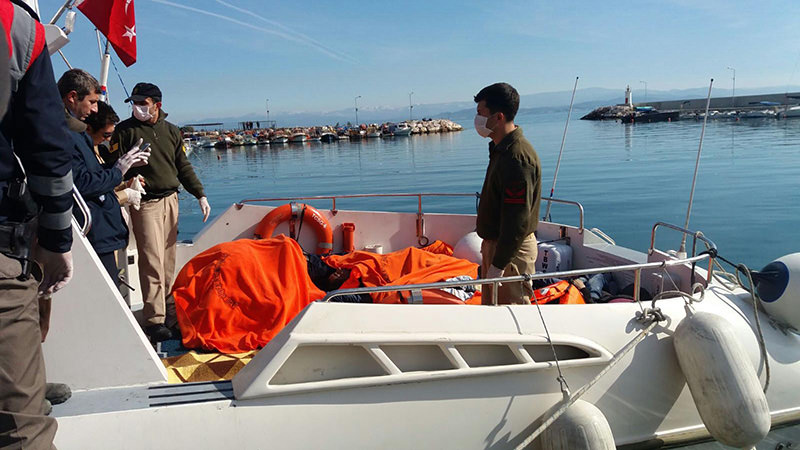 Migrants flocking to Turkey's Aegean shores in hopes of crossing into Greece marked another day of tragedy on Monday. At least 27 people drowned and some 11 people went missing when a fiberglass boat carrying migrants sank off the Gulf of Edremit in northwestern Turkey.

Coast Guard officials said migrants had left the Altınoluk district of Balıkesir province, heading to the nearby Greek islands when their boat sank. The cause of the sinking was not known but officials attribute it to overcrowding as there were some 40 people aboard, according to survivors, when it sank. Only four people survived the incident. Search and rescue crews combed the vast stretch of sea by helicopters and boats to retrieve the bodies and survivors.

The sinking was discovered when survivors asking for help were noticed by fishermen who managed to rescue one survivor from the sea.
The casualties included 11 children of various ages. Ambulances and hearses rushed to the shores of the small district, which serves both as a popular vacation spot for Turkish tourists and a favorite departure point for migrants pursuing dreams of a better life in Europe.

The Turkish coast, especially the shores of provinces likes Çanakkale, İzmir, Muğla, Balıkesir and Aydın, provide a launch pad for refugees seeking shelter in Europe, due to its proximity to the Greek islands– the main gateway to the continent from Turkey by sea. According to the latest figures, the Coast Guard intercepted more than 97,000 migrants off the country's Aegean and Mediterranean coasts as they headed to the Greek islands last year and in the first two months of 2016. The figures are far higher than those intercepted by the Coast Guard in 2014 and point to a serious escalation of the refugee crisis further fueled by the ongoing conflict in Turkey's southern neighbor Syria. Some 390 people have died en route to Greece since January 2015, the Coast Guard reported. According to the International Organization for Migration (IOM), the death toll for migrants in the eastern Mediterranean, including those who died near the Greek islands, reached to 1,024 from January 2015 to January 2016.
As winter set in, many predicted that the refugee influx would decrease, but more migrants have arrived on Turkish beaches, according to media reports. The migrant flow has ceased over the past two weeks due to severe storms in the Aegean Sea separating Europe from Turkey. However, eyewitnesses say migrants rushed to the beaches on the country's Aegean coast, which stretches for more than 2,600 kilometers from Çanakkale and Balıkesir in the northwest to Muğla in the southwest where migrants depart from secluded spots. Migrants, mostly Syrians, race to join hundreds of thousands of people who reached Europe via the Aegean Sea last year, clinging to their hopes of survival with life vests and dinghies, which often turn out to not be seaworthy. More than 850,000 migrants arrived by sea in Greece last year, making up the majority of the more than 1.1 million refugees who entered the EU last year.

Journeys to Europe are a matter of life and death for refugees and some, like Muhammed Hussein Ashirat Aslan from Aleppo, think it is better to die in the Aegean than at the hands of shrapnel in Syria. Aslan was among some 700 refugees intercepted by security forces yesterday on the beaches of Dikili, a district of İzmir. Aslan was an architect in Syria when the uprising by the opposition evolved into an all-out conflict five years ago. The conflict now has more than two actors with the rise of DAESH and air support by Russia for the Bashar Assad regime. Aslan says the situation worsened in Aleppo after Russians started airstrikes. For him, reaching Europe is the only solution to his problems. "People flee cities. Cities are bombed every day. Most towns are entirely deserted. I couldn't live there. Even if I could, there weren't any job prospects. So, I decided to go to Europe to find a job. I already lost 18 people from my family. It is better for us to be fodder for the fish here at sea than being killed by bombs in Syria," he told Anadolu Agency.

Lina Abdulkarim, a Syrian woman, echoed Aslan's concerns about the situation in Syria. She lost 21 relatives in the ongoing war. "Both Russian planes and Assad's planes rain down bombs on us. They never stop, day and night. We heard that migrants in European countries are given residence and money. So, we decided to go. We know it is too dangerous but this is our only option," Abdulkarim told AA. "It is better to die here than die in the war. There will be more people here as long as the war continues," she says. Apart from life vests, their only means of survival is faith, she adds, noting that Muslim migrants utter "shahada," an Islamic creed Muslims are advised to say while facing certain death.

Both Turkey and Greece are struggling to cope with the surge of refugees. The Coast Guard constantly patrols the long stretch of coast in search of refugees and their smugglers, just like their Greek counterparts who are looking to intercept migrants before they reach the islands.

Countries in Europe are facing the largest refugee flow since the end of World War II, and have stepped up measures on the borders to curb the influx – despite this dealing a blow to the unity of the continent where borders merely serve as landmarks and citizens of European Union member states can travel freely between countries. The EU reached an agreement with Turkey to provide the country with funds to handle the issue. But a worsening conflict in Syria with the rise of DAESH, a similar crisis in Iraq with DAESH expanding its operations and a comeback by the Taliban in Afghanistan coupled with a high rate of poverty may further increase the number of migrants flocking to Europe.

To efforts to curb the refugee flow to some extent, Turkey is repeatedly calling for the establishment of safe zones within Syria for displaced people. The international community remains reluctant, however, and Russia's increasing airstrikes that kill civilians are reducing the chance of implementing the plan.
Last Update: Feb 11, 2016 12:45 pm
RELATED TOPICS