Ottoman era masterpiece on auction for $3.4M to set a record 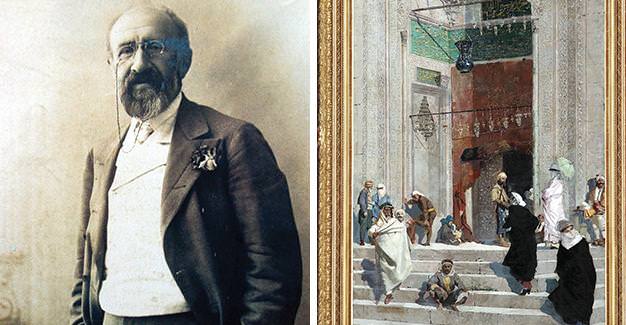 | DHA Photo
by Anadolu Agency Feb 11, 2016 12:00 am
A masterpiece by late-Ottoman-era Turkish artist Osman Hamdi Bey looks set to be sold for a record price at an upcoming spring sale, according to a local auction house.

Antik A.S., one of the leading auction houses in Turkey, announced that the oil canvas piece -- Cami Önü [Green Mosque] -- has a starting price of 10 million Turkish liras (around $3.4 million). 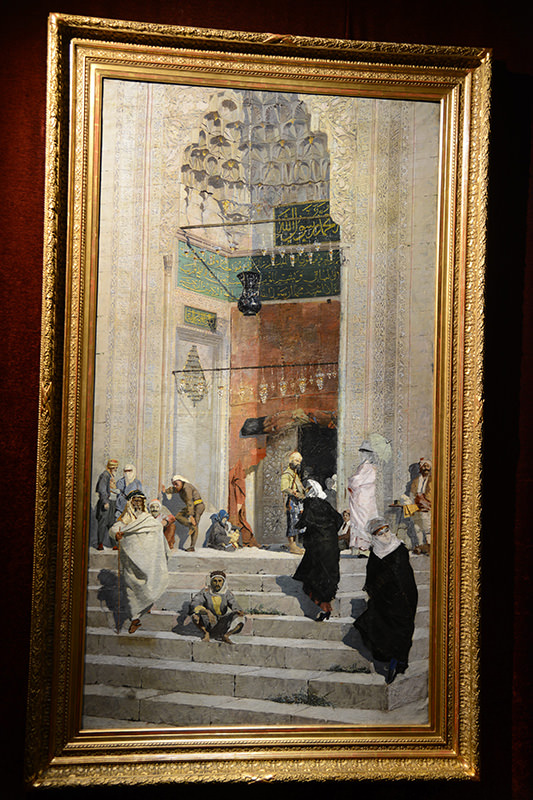 Having played a pioneering role in the maturing of Western art in the Ottoman Empire, Osman Hamdi Bey (1842-1910) was not only known for his paintings but also his contribution in the fields of archaeology and museology.

"As one of the best documented and arguably 'local' artists for the period, Osman Hamdi naturally stands at the very top of this artistic hierarchy.

"Not as an archaeologist but as the organizer of the institution that would be necessary for the setting up of the discipline and for the protection of heritage from looting and destructing.

"The extraordinary prices fetched by Osman Hamdi's paintings have to do with the specificities of the Turkish market for art," Eldem adds.

Eldem -- who is also the grandson of Osman Hamdi's niece Azize Hanim and writer of many books on the artist -- says the Turkish art market is "recent and still underdeveloped which lags behind the international market and is trying to set up its own standards".

"With very little artwork available for the nineteenth century, practically anything painted in or about the Ottoman Empire will acquire an inflated value," Eldem adds.

Eldem also points out the socio-economic side of the issue -- where a burgeoning Turkish middle class fuels the desire for expensive fine art, "in the shape of a moneyed bourgeoisie that has developed since the liberal turn of the 1980s and wants to acquire art as a form of investment and conspicuous consumption".

The Istanbul-based auction house's board chairman, Turgay Artam, told Anadolu Agency that Cami Önü is one of the most important pieces in Turkish painting.

The 134-year-old painting depicts 16 Ottoman characters including men, veiled women and merchants as well as beggars in front of Turkey's famous Green Mosque in the northwestern city of Bursa -- the empire's first capital.

According to Eldem, the importance of the painting lies in its theme: "It is one of the first examples of a theme that he will exploit and develop for another 10 or 15 years."

One of the largest known oil-canvas works by Osman Hamdi, the painting is likely to fetch a very high price, says Eldem, "for the simple reason that there are practically no Osman Hamdi paintings left on the market".

"There are constantly new fortunes being made in Turkey, which increases the likelihood of aggressive bids. To this we should add the growing number of private collections turned into private museums, [which] are even more likely to fight over this chance to have an Osman Hamdi," he adds.

Although Eldem does not agree, some scholars view Osman Hamdi as a person torn between East and West and a victim of his period's Westernization dilemma:

"His cultural and civilizational choices were clearly in the direction of the West, with a vision of the East that could range from curiosity to criticism and from aesthetic appreciation to rejection.

"That is what made him an Orientalist, even if he had a good dose of nineteenth-century patriotism that set him apart from his Western contemporaries.

"Yet all of this was done with a great deal of self-assurance and, eventually, success, rather than victimization.

"As to the critical assessment of his work as tainted by Orientalist cliches and hesitations, it rests on too much retro-projection and hindsight based on our contemporary concerns."

One of the famed paintings of Osman Hamdi, The Tortoise Trainer -- which dates back to 1906 -- was sold for a record 5.5 million Turkish liras in 2004 by Antik A.S. and it is now part of Istanbul-based Pera Museum's collection.

Another painting -- Istanbul Hanımefendisi [The Lady of Constantinople] -- was sold for $6.5 million at a Sotheby's auction in London, another record for the artist, in 2008.

His Vazo Yerleştiren Kız [A Girl Arranging a Vase for Flowers] was sold by Antik A.S. for 3.2 million Turkish liras in 2012 while another London auction saw the sale of the artist's Kuran Okuyan Adam [Man Reading the Quran] for £3 million in the same year.

For Eldem, Osman Hamdi -- "the very unique actor of modernity in Ottoman history" -- is remembered as an artist for the "sensational aspect of the prices his works have fetched recently."
Last Update: Feb 11, 2016 1:56 pm
RELATED TOPICS