Surviving migrant 'amazed' at his rescue from Aegean 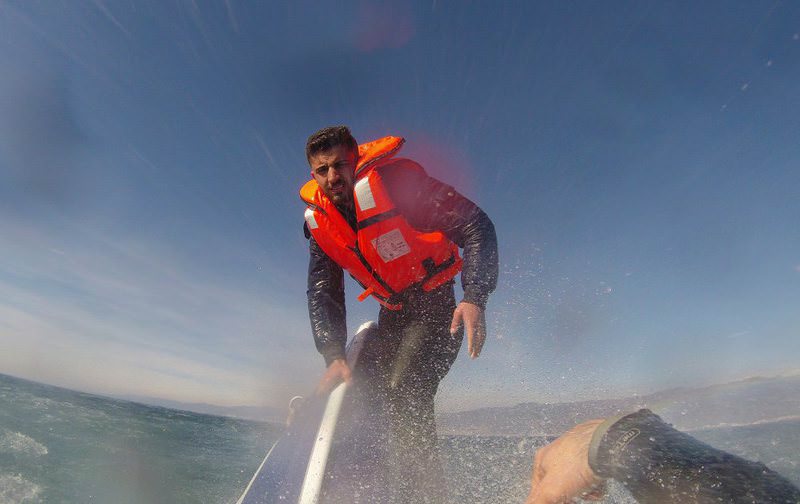 by Anadolu Agency Feb 11, 2016 12:00 am
Pelan Hussein made headlines on Tuesday when a photo emerged of the young Syrian hanging onto the tip of a sinking boat. The 20-year-old migrant was heading to Greece with 27 others who drowned when their boat started sinking on Monday. He was among only four survivors, and the only one who was still clinging to the boat when the Turkish Coast Guard found him off the coast of Edremit, a town on Turkey's Aegean coastline.

The migrant recounted the moments when Turkish officers reached out to him and took him to safety, expressing his astonishment at the rescue. "Soldiers saved me. It was amazing. I couldn't believe it. I thought I would die," Hussein said while in a gendarmerie garrison, near where the boat sank.

Hussein was among some forty people who boarded a fiberglass boat, like hundreds of people who take the risky journey from Turkey to the nearby Greek islands every day through the rough waters of the Aegean. He waited for a few hours, holding onto the 10-meter long boat, which was mostly submerged when a Coast Guard helicopter showed up and an officer hoisted him to safety. "I was there from three in the morning to twelve at noon. I would have died if it weren't for the soldiers," he said.

Hussein, from a Syrian family living in Iraq, was accompanied by a friend during his trip to Greece that he hoped would eventually take him to Germany. His friend was among the casualties.

The young man thanked everyone, from President Erdoğan to the sergeant who pulled him out of the water, for his miraculous rescue. "Everyone treated me well here. My only problem is pain in my feet, but I have nothing else to complain about," he said. Hussein plans to return to Syria before meeting friends in Istanbul, as he ruled out a return to the Aegean coast to reach Europe.

The Turkish coast, especially the shores of provinces likes Çanakkale, İzmir, Muğla, Balıkesir and Aydın, provide a launch pad for refugees seeking shelter in Europe, due to its proximity to the Greek islands - the main gateway to the continent from Turkey by sea. According to the latest figures, the Coast Guard intercepted more than 97,000 migrants off the country's Aegean and Mediterranean coasts as they headed to the Greek islands last year and in the first two months of 2016. Some 390 people have died en route to Greece since January 2015, the Coast Guard reported.
RELATED TOPICS