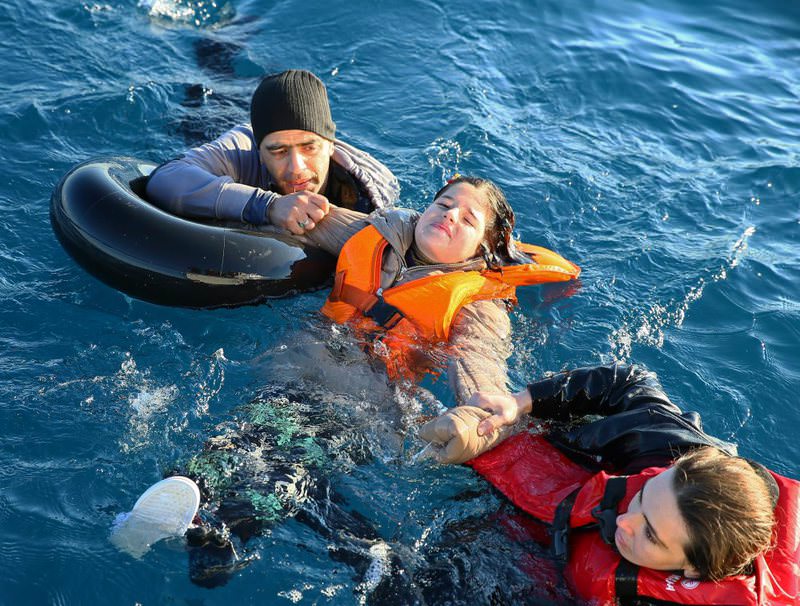 Coast Guard officers help refugees swimming with buoys off the coast of Didim in western Turkey. Their boat capsized en route to Greece, killing four refugees.
by Daily Sabah with IHA Feb 13, 2016 12:00 am

As the illegal industry catering to migrants grows, smugglers take advantage of Facebook and online forums, luring Syrian migrants who seek to cross into Europe

As the number of illegal immigrants heading to Europe from Turkey and other countries increases, the Internet proves to be instrumental in facilitating the thriving business of human smuggling. Smugglers turn to Facebook groups and expat forums to fish for potential customers. Some invitation-only Facebook groups and forums almost work as websites for legitimate travel agencies offering "special packages" for migrants hoping to reach Europe via the Aegean Sea between Turkey and Greece.

Smugglers offer half the price for children and free trips for infants to Greece. They advertise their "successful" trips by broadcasting videos of migrants managing to reach the Greek islands alive, unlike hundreds of others that have drowned in the perilous waters of the Aegean.

Human smuggling thrives in Turkey, a transit route for migrants from Middle Eastern and Asian countries due to its location between Europe and Asia. The war in its southern neighbor Syria has made Turkey a favorite destination for migrants who use it as a launch pad for journeys to Europe. Most migrants prefer sea routes due to the proximity of the coast to the Greek islands, while others prefer a land route to the northwest. Turkey plans to introduce heavier sentences for human smugglers. Human smuggling will be classified as an act of terror and an organized crime. The move may help Turkey's crackdown on smugglers, which has seen the detention of 204 people accused of organizing illegal crossings across the Aegean Sea between Turkey and Greece since January 2015.

Bad weather and packed boats make the journeys unsafe, but still, those forced to make a choice between living in squalor and war zones and a potentially deadly journey often opt to take their chances on the sea. The Turkish and Greek Coast Guards patrol the sea around the clock, but a considerable number of migrants - more than 800,000 in 2015 - succeed in arriving to Greece.

Facebook is awash with groups where smugglers present their "services" for customers seeking to reach Germany or Italy. Invitation-only groups provide information on migration routes, schedules for trips and fees, along with photos and videos of migrants who have managed to reach their destination in Europe. Migrants write in the comments below the videos and photos to inquire about fees.

Turkey is not the only country where smugglers seek customers. Smugglers also advertise journeys into Europe from Libya.

Smugglers in one such group advertise that the journey from Turkey to a Greek island takes only 40 minutes and customers are offered a slot in a boat with a capacity for 35 people.

Migrants are charged at least $2,500 for journeys aboard shoddy boats, but smugglers charge more for trips aboard yachts or wooden boats. Most smugglers are of Syrian and Iraqi nationalities, but Turkish smugglers also try to lure migrants in from the groups and forums where the entire correspondence is in Arabic.

A Facebook video shows a Syrian migrant detailing his experience with the smugglers. He says Abuzahra - probably a false name - from Iraq helped them to cross into Greece and vouches for him. "There are good smugglers and then bad smugglers. First of all, you should pay in cash rather than wiring money to smugglers. Abuzahra helped me and nine others to make it [to Greece] alive," he says. The migrant says they departed at midnight and it took them five hours to reach the island of Lesbos. "It wasn't dangerous," he claims, apparently forgetful of the hundreds of others that died on the same route last year and this year. Last week, 27 migrants died as they were heading to Lesbos when their boat sank.
RELATED TOPICS