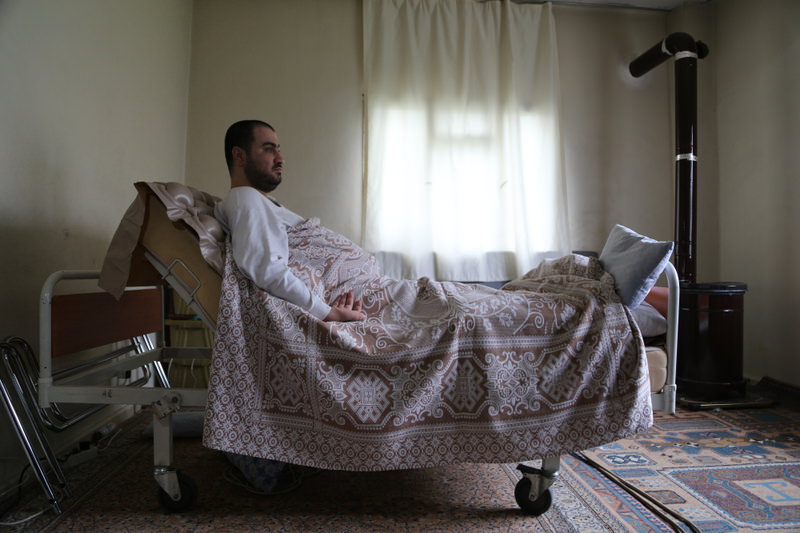 Kolal Ahmad was targeted by snipers while he was headed to his office. Due to severe injuries, he is paralyzed and has not been able to get out of the bed for the last 18 months.
by Daily Sabah with Agencies Feb 15, 2016 12:00 am

As the world focuses on refugees trying to cross the Aegean Sea, the disappearing culture and traditions of Syrians are being ignored. Syrian families are torn apart, not knowing where the rest of their family is

Syrians who were forced to abandoning their homeland to flee the ongoing civil war in Syria and build a new life for their families do not always end up finding what they had hoped in the lands that they took shelter. Although most of the Syrian families are able to stay together despite the dangerous route that they follow to get to the places they wanted, many lost their children or parents along the way. The broken Syrian families are hoping to be united with their loved ones or be able to mourn and pay their respect to the dead.

Suphi Hamendus, 59, his wife Raniye Bas, 46, and three children took shelter in Turkey's eastern Malatya province after feeling from Syrian leader Bashar Assad's regime forces. However, one of Hamendus's sons was left in Lebanon as he fled from Syria before the other members of the family. Now, father Hamendus wants his 29-year-old son to be united with the rest of his family in Turkey. Mother Raniye Bas told Anadolu Agency (AA) that they had to leave their home and settled down in another region in Syria once the civil war broke out, but they had no choice to leave this place as well since there was no hospital nearby for her husband who is a cardiac patient to receive treatment. Bas and her family first took refuge in southeastern Gaziantep province but then decided to move to Malatya province.

"When the war broke out, our financial state went bad and we were broke after few months. My son Ali Hamendus went to Lebanon before we left Syria. He worked in Lebanon and sent us some money. Two of our sons crossed the Turkish border and built a life here so my husband and I also decided to come to Turkey to be united with our two sons," said mother Bas. Bas who is longing for her son called out to President Recep Tayyip Erdoğan and asked for his help to bring her remaining son to Turkey. "I want my son to be with me. He wants to come here but he has no passport," said Bas. The mother also said that his son Ali is struggling with various medical problems and he cannot get any treatment for his illnesses. She also informed that his son lost his job in Lebanon and is living in a very difficult situation on his own. "I thank God for Turkey every day as you opened your doors to us. We appreciate the help and support we receive from Turkish people as well as President Erdoğan and Prime Minister Ahmet Davutoğlu. We have already blended in with local people; we do not want to leave Turkey. All we want is our family to be untied once again," concluded mother Bas. Father Hamendus said that his only wish is to see his family altogether once again before he dies.

Not everybody is as lucky as the Hamendus family though. Syrian Adnan Ahmad lost two of his sons during the fights in Syria. Ahmad, 59, a father of four, fled from Homs, Syria and settled in Turkey's southern border province of Hatay with his son Kolal, 31, who has been paralyzed for the last four years.

Ahmad first lost his 22-year-old son Abdul during a bomb attack in Syria and his 33-year-old son Usem, who left house to go to Sarmada and never came back has been missing for the last 1.5 years. His son Kolal, on the other hand, was targeted by the snipers while he was headed to his office. Due to his severe injuries, he was paralyzed and has not been able to get out of the bed for the last 1.5 years. Ahmad said that he is experiencing the hardest things that a father can experience in his whole life, noting that he is caring for his paralyzed son on his own as his wife is sick as well. "The civil war in Syria gave me the grief of losing my children. One of my sons lost his life and I have not heard news from the other for over a year. I have my daughter and my other son with me but Kolal's life is very hard. Yet, we are happy that he is alive. He underwent several surgeries in Hatay but he is still paralyzed. We are looking after him like a child: I feed and dress him every day and shave him once a week. Since we are having financial problems, it is hard for us to care for him from time to time," said father Ahmad.

Kolal who is living like a prisoner in the house needs a battery-operated wheelchair to get fresh air and blend in the community; however, the Ahmad family is in no position to provide their son this privilege. Meanwhile, Kolal said that he cannot believe he is still alive. He said he came to Turkey with severe injuries and continued, "I left the house to go to work. Without understanding what was going on, I felt warmth on my back and I cannot remember the rest. My parents took me to a medical center in Homs but the center was not suitable for my injuries. We came to Turkey and thank God I am better. The bullet is said to hit my spine. Thank God I am still alive."
RELATED TOPICS