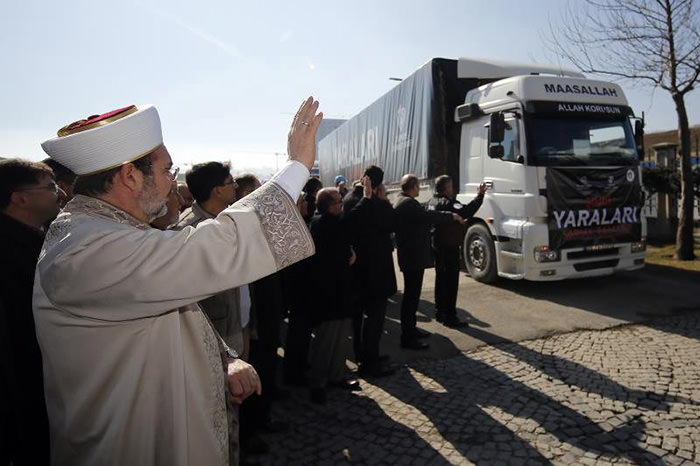 |DHA Photo
by Anadolu Agency Feb 16, 2016 12:00 am
Thousands of families in southeast Turkey who have fallen victim to PKK terrorism are being provided with humanitarian aid, a Turkish government official said Tuesday.

The victims include families of security forces who lost their lives.

Deputy Mufti of Şırrnak Province Mehmet Fatih Özturk told reporters on Tuesday that a total of 10 trucks filled with foodstuff supplies and blankets will arrive in Şırnak Province under the framework of "Now is the time to heal wounds" campaign initiated by the Presidency of Religious Affairs and the Religious Foundation of Turkey (Diyanet).

"Some trucks are coming, some were received," Öztürk said, adding that thousands of families, mainly in Cizre and Silopi districts, have or will receive a foodstuff packet and a blanket each.

A 47-year-old man, identified only by his initials A. A. out of fear for his safetly, thanked all those who contributed to the aid.

A.A. said that he and his family had fled Cizre district due to the terrorist attacks and were now staying with their relatives in Şırnak province.

Bayırbucak Turkmens will also be covered in the aid campaign.

In the first round of the effort, 20 trucks will distribute 40,000 food parcels and blankets in the area, according to the Religious Foundation of Turkey's website.

Presidency of Religious Affairs and the Religious Foundation of Turkey have urged businessmen, tradesmen, chambers of commerce and industry, trade unions, non-governmental organizations, artists and all nationals to support the campaign.

People can also donate to the cause online at "www.diyanetvakfi.org.tr" or via SMS message: "YARASAR" to 5601, or by sending money at a designated bank account.

More than 260 members of the Turkish security forces have been killed and thousands of people have fled their homes in southeast Turkey since the PKK terror organization resumed its 30-year armed campaign against the Turkish state in late July 2015.