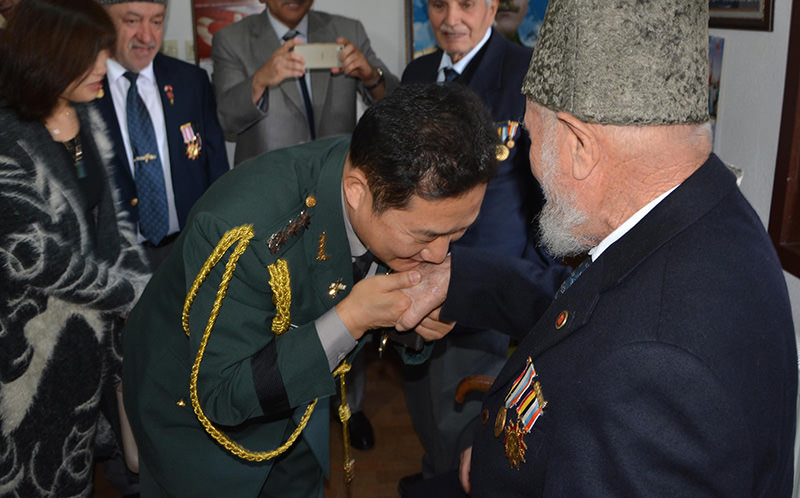 Defense attaché Colonel Joosenog Han, whose commission at the South Korean Embassy in Ankara expired, has visited Turkish veterans of the South Korea War and bid farewell to them before leaving for his country.

The visit which was quite emotional for both sides, took place at the Turkish War Veterans Association at the northern province of Karabük on Tuesday. The colonel was accompanied by his wife, and as he entered the association, he started kissing the hands of the elderly veterans, which is a traditional gesture in the Turkish culture to signify respect for people significantly older than one's self.

This was not the first time that the South Korean defense attaché visited the association. In a visit he undertook in March 2014, a deceased veteran's son had told him that his father had long waited for the colonel to come, but he had died only two days ago, Han said. The veteran's son, Serhat Dalgıç, had then given him his father's picture, for the colonel to keep. Han, who burst into tears while explaining the situation said:

"I have been looking at this picture [of the deceased Turkish veteran] for the last two years. I have decided that I should show my respect to them by visiting them. This is why I have been going around Turkish villages during the last years [to see veterans]. I have even driven up to seven hours to see even one person in villages."

Before going back to his home country, the attaché wanted to pay a visit to the cemetery of the deceased Turkish veteran Necati Dalgıç whom he never had a chance to meet and had been keeping his photograph in his wallet.

Han also gave the veterans of the association a gift sculpture of a Turkish soldier.

The chairperson of the Karabük branch, Sebahattin Çorbacı also made comments to the reporter saying, "How happy are the veterans and Turkish soldiers, if people come all the way from Korea and visit our veterans' cemeteries."

"The Korean people, soldiers and attaches have always welcomed and appreciated Turkish soldiers, and keep doing so."

After his visit to the Association, Han then went to Necati Dalgıç's cemetery, where he poured water on the grave, which is a custom in Turkey, and prayed. The colonel then stood in homage to the deceased veteran by the grave, along with other veterans from the association.
Last Update: Feb 17, 2016 3:45 pm
RELATED TOPICS