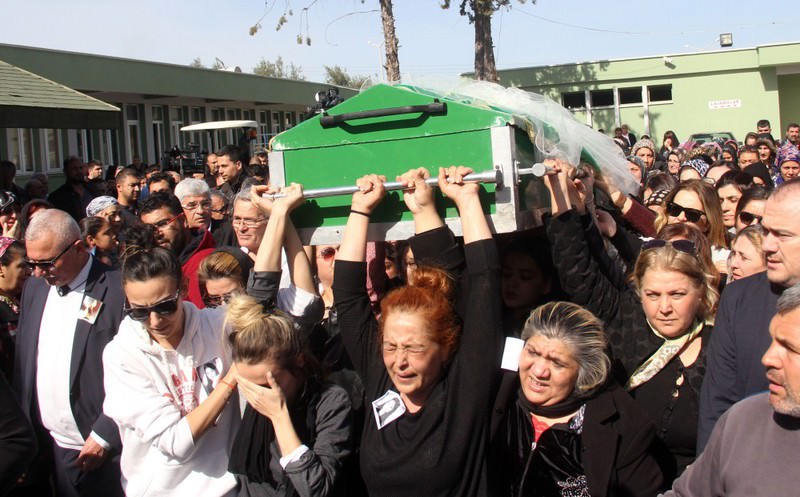 Women carry the coffin of Tu00fcrkan Saru0131kaya in the southern city of Adana on Feb. 16. Saru0131kaya was killed when she refused the advances of a man who was obsessed with her and was the latest victim of violence targeting women.
by Daily Sabah Feb 18, 2016 12:00 am

Figures released by a nonprofit organization show 413 women have been killed by their spouses and relatives since February 2015, a low figure in a country with a population of more than 78 million. Concerns remain, however, as the country struggles to put an end to violence against women with harsher sentences and through education initiatives

The Hope Foundation, a nonprofit organization against gun violence, released figures regarding the number of women killed between February 2015 and January 2016. The figures compiled from the media indicate that 413 women were killed in that period. The number is higher than the average number of 226 women killed between 2010 and 2015 but low when considering Turkey's population is more than 78 million.

Domestic violence and the murder of women by their husbands, partners and relatives have long been thorny issues in Turkey where broader media coverage has made the disturbing phenomenon more visible. Factors ranging from a warped mindset motivating men to kill women who cheat on their spouses in so-called "honor killings" and lighter sentences for perpetrators of murders targeting women were blamed for the prevalence of the crime.

The Hope Foundation report started the body count after the grisly murder of Özgecan Aslan, a young university student. Aslan became a symbol of violence against women after her charred, mutilated body was found in February 2015 near her hometown in the southern province of Mersin. She had reportedly resisted a rape attempt by the driver of a passenger bus she boarded. The bus driver and two others were sentenced to life for her murder, which prompted nationwide protests against the violence in support of the decision. Since her murder, 414 women have been killed across the country up until January when 40 women were murdered by their spouses or relatives.

A statement from the Hope Foundation said the victims were as old as 85, and some 91 women were severely wounded by incidents of domestic violence. Istanbul had the highest incidence of murders with 34 cases and was followed by its eastern neighbor Kocaeli with 11 murders. No cases were reported in 19 cities, including Bayburt in the north, Çankırı in central Turkey and Tunceli in the east, though "suspicious suicides" were reported in several cities without female murders, according to the Hope Foundation, referring to murders disguised as suicide.

A total of 40 murders were reported in January. The report also said 55 husbands who committed the murders also killed themselves after slaying their spouses between 2015 and 2016

Violence, which occasionally ends with the killing of a woman by her spouse, claimed 1,134 lives in the last five years, according to another nonprofit organization quoting unofficial figures.

Lethal domestic violence is a common occurrence in the country with victims, often women, seeking divorce. Although police protection and shelters are available for women threatened by their spouses, authorities say it is difficult to prevent murders or acts of violence simply by legal measures.

Turkey is one of the signatory countries of the Istanbul Convention, the first comprehensive and legally binding international document on domestic violence. The convention that came into force in 2014 requires the implementation of several steps to combat the violence. Amid the obligations the convention demands of countries is the penalizing of psychological violence toward women and female genital mutilation and acting as an accomplice for perpetrators of violence. The convention also orders countries to begin campaigns to raise awareness of gender equality, such as educating students on the issue. Signatory countries will also be required to implement effective laws against domestic violence and protect the victims as well as offer them therapy.

The government is about to wrap up an action plan to fight violence against women. The action plan is expected to improve legal and preventive measures by the judiciary and law enforcement, and further raise awareness about the issue. The plan will also provide more assistance for victims and rehabilitation for perpetrators.

Turkey established Violence Prevention and Monitoring Centers in 39 cities to monitor the state of violence against women and to help victims. Those centers will be available all across the country by the end of 2016.

Violence against women is "a pandemic of global proportions," according to the United Nations Entity for Gender Equality and the Empowerment of Women (U.N. Women). One in three women have experienced physical or sexual violence, mostly by an intimate partner, according to U.N. Women.

No concrete statistics are available on the issue due to the reluctance of countries to disclose murders that have resulted from domestic violence, but the numbers are relatively low in Europe and the United States, according to women's rights activists - though it seems impossible to completely eradicate the trend. For instance, more than 1,600 women were killed in the U.S. in 2013, the latest year with an available figure, according to the Violence Policy Center. The majority of them were killed by men they knew, and 62 percent of perpetrators were spouses, ex-boyfriends or former partners. In the United Kingdom, 125 women were killed or suspected to have been killed by their husbands, boyfriends or close relatives, according to the website Counting Dead Women, which, like the Hope Foundation, compiles the numbers from media reports and other open sources.
RELATED TOPICS