Fresh riots erupt at site of planned Artvin copper mine 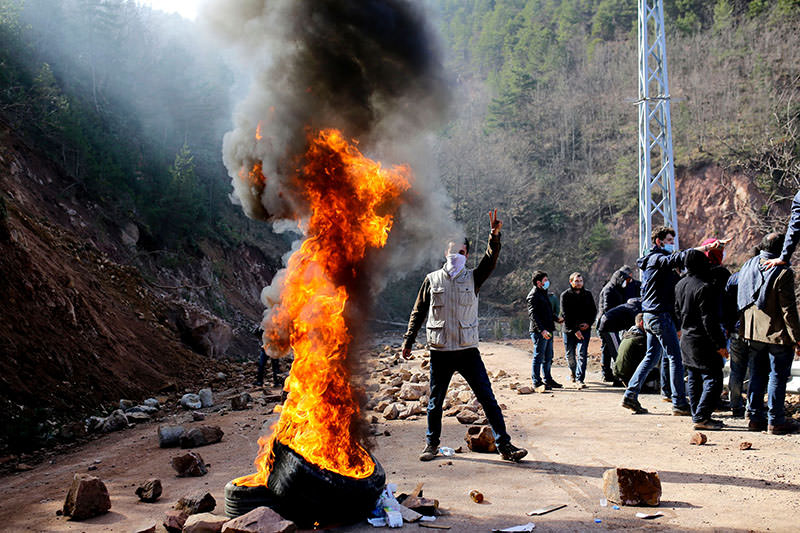 Rioters stand near burning tyres during a protest on February 17, 2016, in northern Turkish city of Artvin (AFP)
by Compiled from Wire Services Feb 21, 2016 12:00 am
Police intervened on Sunday as some 2,000 people attempted to march to Cerattepe, a district of the northeastern city of Artvin that will be the site of a future copper mine.

Rioters clashed with police almost one week after protests against the mine they claimed would harm the environment escalated into riots.

The group hurled rocks and bottles at riot police preventing their march to the site from central Artvin. Police fired tear gas and water cannons to disperse the mob who tried to force their way.

Rioters were dispersed but more protests are expected as the opposition to the construction project grows.

The government defends the private-run mine, saying it will not harm the environment. Speaking to reporters on Saturday, Prime Minister Ahmet Davutoğlu said Cerattepe hosts "one of the most beautiful places on earth and it is our duty to preserve its nature."

He added that Turkey also needed to extract mineral resources and can "do so without harming the environment thanks to technology." Davutoğlu has accused the rioters of "provocation."

"We will not allow those exploiting the situation for their own interests to blame the government. Turkey is a country with rule of law, and all provocations will be responded in kind," he said.

He cited several environmental impact assessment reports prepared by experts, and vowed to "take measures" if the mine is found to damaging the environment.
Last Update: Feb 21, 2016 5:46 pm
RELATED TOPICS