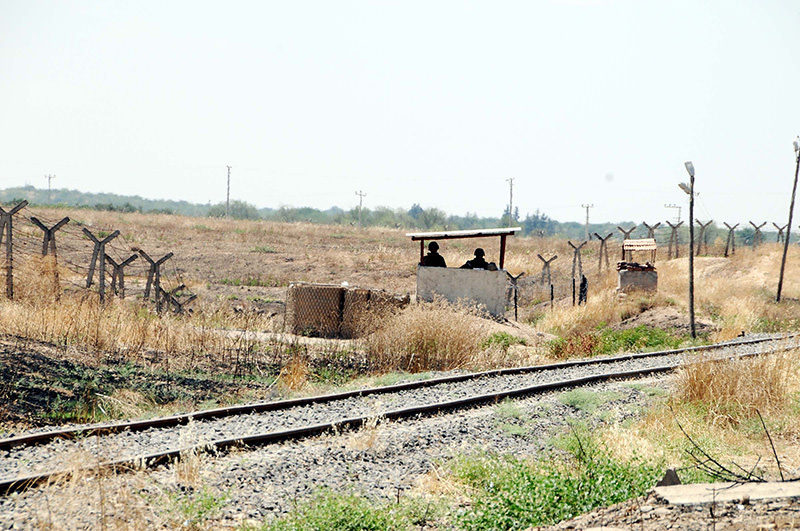 The Turkish army announced on Monday that 1,220 DAESH suspects have been captured trying to sneak into Turkey and Syria since January 2015 as the country beefs up measures against the terrorist organization blamed for attacks within Turkey

The Turkish Armed Forces revealed on Monday the latest figures regarding attempts by militants of the DAESH terrorist organization to cross undetected into Turkey and Syria. A total of 1,220 suspects were captured between January 2015 and February 2016. These numbers point to the increasing threat of the terrorist organization, which controls vast swaths of land in Syria and Iraq and has been blamed for a string of attacks in Turkey.

A total of 961 suspects were captured last year while 178 people were arrested in January 2016 and another 81 earlier this month, according to army sources. Thirty-three people captured this month were attempting to sneak into Turkey through the country's lengthy southern border.

Most detainments have reportedly been made in the Elbeyli district of Kilis, a southern Turkish province which borders Syria. Elbeyli is located across the border from a Syrian town largely occupied by DAESH. Army sources attribute the increased number of captures to stricter border controls as the aggravated conflict in Syria continues into its fifth year and Russian airstrikes accompanied by fierce battles between the regime and rebels persist.

Turkey has detained 3,318 people in efforts to fight DAESH and other terrorist organizations since they emerged in Syria a few years ago and have already arrested 847 of the 3,318 suspects, according to the Interior Ministry.

Due to its proximity to Syria and Iraq where the terrorist group is active, Turkey is exposed to threats from DAESH – which has grown in the hotbed of regional instability and classifies Turkey as one of its many enemies. While clashes with rebels continually spill over into Turkish territory, the country struggles to maintain its lengthy border with war-torn Syria protected with walls and firepower.

In January, the Turkish army struck DAESH targets along the border with Syria and Iraq, killing 200 terrorists. The attack was in retaliation for a deadly suicide bombing that killed 12 German tourists in Istanbul's Sultan Ahmet Square in January.

The attack was the latest to be carried out by the terrorist group, which launched its first major attack against the country in July 2015 when a suicide bomber affiliated with the group killed 32 at a rally in Suruç, a Turkish town bordering Syria. The attack was followed by twin bombings in Ankara, at another rally, on Oct. 10. The bombings killed 102 people in the capital city, the deadliest in recent memory.

Also in January, DAESH militants opened fire on a Turkish military outpost in the district of Kilis.

Turkey has listed the group as a terrorist organization since 2013.

The country is also under threat from an increasing flow of foreign recruits to the group in Syria. According to sources, Turkey has spent TL 300 million ($102.77 million) on border security in the wake of the escalated conflict in Syria, which gave rise to the DAESH threat. Nearly 400 kilometers of ditches and 73.6 kilometers of embankment were dug, in addition to 17.5 kilometers of concrete wall being erected along the border. Troops are gradually being reinforced on the border where smuggling activities also escalated after the conflict in Syria erupted.

The rest are believed to be in Syria. Suspects include Halis Bayancuk who goes by the alias "Abu Hanzala," a Turkish citizen who gained notoriety in the Turkish media for being a senior leader in a Turkish branch of the DAESH network; although an indictment says that İlyas Aydın – or Abu Ubaida as the terrorist organization refers to him – is actually the leader of DAESH's local affiliate. Being among those who left for Syria Aydın, along with Bayancuk and other

Turkish citizens including six defendants from Kuwait, France, Libya, Colombia, Syria and Saudi Arabia are on trial for being members of the terrorist organization. The indictment asks for a prison sentence of up to 15 years for Aydın on charges of founding and running an armed organization. Bayancuk and others are accused of membership and face 10 years in prison.

The indictment says that Aydın acted as "a chief cleric" in the organization and recruited supporters for DAESH. Aydin is accused of broadcasting videos online urging people to take part in "jihad" in Iraq and Syria, as well as holding house gatherings to brainwash potential recruits into joining DAESH.

"They see the Turkish state as 'takfiri,' or an infidel, and call on people not to send their children to Turkish schools. Their propaganda led some sympathizers to travel to conflict zones to fight for DAESH and sever ties with family members who oppose their participation with the terrorist group," according to the indictment. The indictment accuses Aydın of organizing trips bring recruited DAESH members to Syria.

The suspects are also accused of aiding the transfer of wounded militants from conflict-stricken zones into Turkey for treatment and delivering logistical support to the terrorist organization.
Last Update: Feb 22, 2016 3:21 pm
RELATED TOPICS