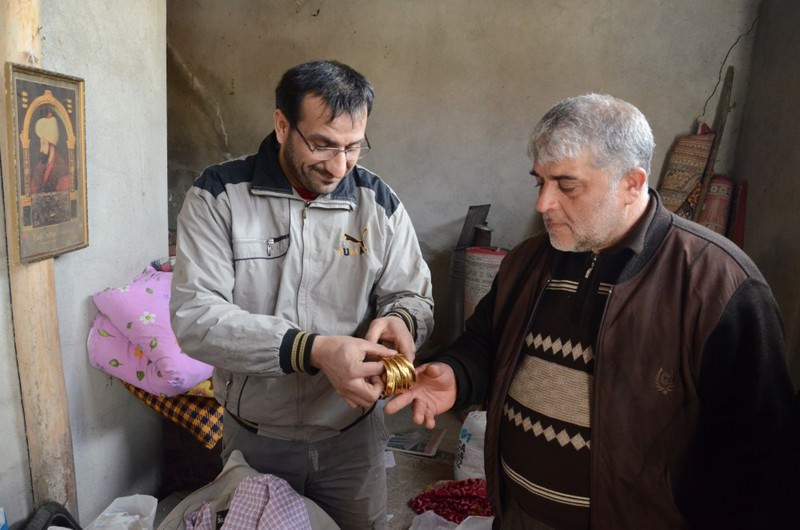 by Daily Sabah with IHA Feb 23, 2016 12:00 am
Social media users in Turkey heaped praise on a Syrian man whose honesty was lauded after he found and returned gold bracelets. Abbas Taha, 38, who lives in the eastern province of Malatya where he took shelter after fleeing the civil war in Syria three years ago, is an unemployed man living in a rental home with his family. He depends on charitable aid as he has not been able to find a legitimate job.

One day, he found six gold bracelets in a box containing clothes donated by locals. The bracelets were apparently forgotten amid a pile of used clothes. He immediately contacted local journalist Alişan Hayırlı who handed him the aid on behalf of the donors. Soon, they found the clothes belonged to the late Ahmet Eserçelik and was donated by his family after the 79-year-old man died. Hayırlı helped him contact the Eserçelik family and Taha returned the bracelets, to the joy and tears of the original owners. Taha did not speak much about his act that drew widespread praise other than saying he was once as wealthy as the owner of the bracelets. Savaş Özbey, who received the bracelets on behalf of the Eserçelik family, said he became emotional when Taha contacted him. "These people fled a war and they don't even have something to eat. So, it was quite an emotional experience for us to have them return these bracelets," he said. Özbey said the family would sell the bracelets and would cover Taha and his family's needs with the revenue.

Turkey hosts more than 2.5 million Syrian refugees. Only a tiny fraction of refugees live in camps set up by the state near the Turkish-Syrian border. The rest of them are dependent on humanitarian aid, and they fend for themselves either in rental houses or by personally setting up tents.
RELATED TOPICS