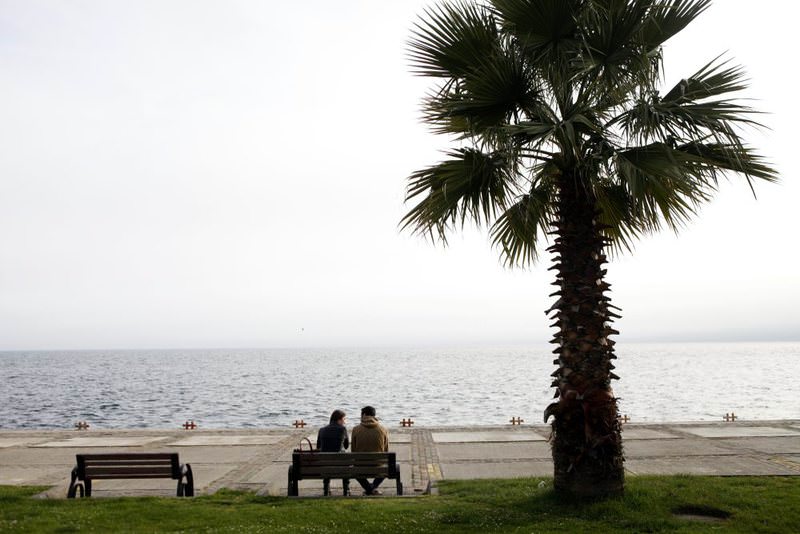 A man and a woman sit on a bench on the shore of Sinop, Turkey's northernmost city, where the ,happiest people, or individuals most satisfied with life live, according to a 2013 survey.
by Daily Sabah Feb 24, 2016 12:00 am

A new TurkStat survey paints a happy picture of the Turkish public with the number of people saying they are happy rising a slight 0.3 percent from last year, as well as a rise in people expressing hope for a better future

Being happy in a developing country struggling to revive its economy and eliminate threats from terrorism is a tough task. Nevertheless, a new survey released by the state-run Turkish Statistical Institute (TurkStat) shows the public is happy with the way they live and prospects of a better future remain intact for many.

Happiness is a relative concept, as the findings of the survey reveal. The survey results show that women are less happy than men, with the percentage of happy women falling to 60.2 from 60.4 in 2014, while men who said they are happy increased 0.9 percent. Although TurkStat did not give any reason for the drop in women's happiness, it can be attributed to a number of factors affecting women's wellbeing in the country that the government attempts to improve such as gender inequality, especially in employment, and fears of violence toward women. The employment rate for women in the country is about 30 percent and women often face a glass ceiling in employment in high-paying jobs.

According to the survey results, youth are happier than senior citizens. The highest level of happiness was for the 18 to 24 age group at 63.8 percent, while it remained at 51.7 percent for participants between the ages of 45 and 54, the lowest for any age group.

Another figure from the survey found that participants put health above all else. More than 68 percent of those interviewed said being healthy made them happiest, followed by love, success, money and work, respectively.

The survey found happiness may be proportional to one's level of education, and if someone had graduated from an institute of higher learning, then they also had a higher level of happiness.

In terms of services they were offered, the participants voiced highest satisfaction for the quality of transportation services followed by health services at 72.3 percent. Turkey has improved transportation services in the past decade and invested highly in a massive road network in a bid to shorten travel times. The government has also long been pursuing an ambitious policy of healthcare reforms that ranges from the construction of modern hospitals to easier access to social security benefits to restore the country's crumbling healthcare system.

Survey participants were also more satisfied with public security and education services, according to its findings.

The survey also found that hope for the future had a slight increase from 73.8 percent in 2014 to 74.4 percent last year. As for overall happiness, men expressed more hope about the future than women.
RELATED TOPICS