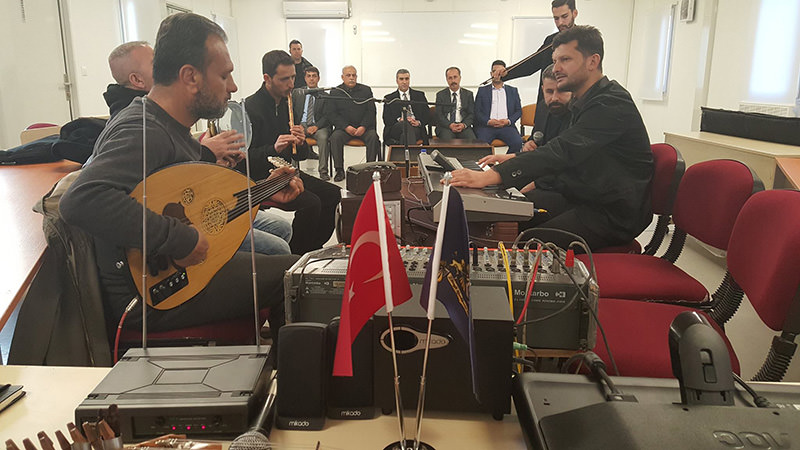 Taken from Facebok page of Elbeyli accommodation facility in Kilis, Turkey
by Daily Sabah with AA Feb 24, 2016 12:00 am

Syrian performers who have fled the war in their own country have been given the chance to revive their profession and culture inside and outside a huge refugee camp in Turkey, thanks to a 22-year-old Turkish musician.

The musical group is composed of 11 refugees and 'orchestra chief' Ertekin has made a concerted effort to find players to fill what he called a "gap" in the camp, namely the lack of music.

"It was very tiring at the beginning," says Ertekin when asked how the idea of forming the group arose. He firstly wandered across the province for a long time and before telling camp officials about his idea.

The young man says he was lucky to find the most of the group members at the camp after getting official approval from the Kilis governorate.

The group-called 'Mustafa Ertekin and His Orchestra' performs concerts, plays at welcoming ceremonies for national and international officials visiting the camp and during special days such as Turkey's April 23 Children's Day.

Ertekin elaborated the aim of the group: "Turkish and Syrian cultures are highlighted in our group and we share our pain with music, we do not use it [music] for fun.

"Music is viewed as a hobby by some people, but my purpose is to make these Syrians express themselves with music," he says, describing the work of the group as a "long-term" effort.

"This is not a work for two or three days; I realized there was a lack of music at the camp and did not want them [Syrians] to be alienated from their culture," Ertekin said.

Turning to the roles of the members, who he said were musicians in Syria before the war, Ertekin said six were playing instruments, three were vocalists and two others, including one female performer, were soloists.

At the white container where they practice, up to 11 instruments could be seen, including oud, violin, baglama (an instrument with three double strings), cumbus (mandolin with a metal body), ney (reed flute) and drum.

Mahir Gani is one of the two soloists in the group. He is from Idlib province and took his family to Turkey in 2013 after one of his five children was killed in a Daesh car bomb attack in the Syrian province.

"Mustafa invited me and told me about the work he was going to do," says the 42-year-old musician. Gani said he accepted the offer and took part in the group, in which he said a "sincere atmosphere" exists.

Gani knows several Turkish songs by heart alongside Arabic tunes: "Our ancient music also exists in Turkish music and our songs are familiar with Turkish ones."

He arrived in Kilis in the spring of 2013 after having been professionally involved in music in his hometown. He expressed his gratitude to be part of the group:

"It is impossible to be unhappy in such a group that performs art," said Gani, adding they were performing a "professional" work.

Ibrahim Canudi, who is from Aleppo and married with four children, plays oud and was earning his livelihood with music before the war erupted.

"I had an oud academy and was dealing with the organization of musical activities in Syria," says Canudi.

Canudi was timid at first while taking part the group. He was worried about potential reactions from the camp residents who might slam the group, saying "we fled a war and you are having fun with music".

"It has nothing to do with that and we are reviving our culture," says Canudi confidently. "It was all about art and they were sharing their pain with music," he adds.

Canudi said they were able to perform their work with the support of residents after the camp officials lent their backing to the group.

"We want to show we are not doing something simple or fun," Canudi adds.

Muhaned Hammedi, 24, is a ney (reed flute) player and was transferred from outside of the camp, according to Ertekin who said he could take him inside as a guest thanks to official approval from the governorate.

"I am very happy to take part in the group; these people are famous in Syria," says Hammedi describing being part of the group as a kind of a dream for him.

"Now, our state has been decimated and fate meets us in this way; they are my masters and we are learning from them," Hammedi added.

The non-profit group just wants to show that it was not doing something just for fun. Some of the group members became registered teachers at schools inside the camp, teaching music to Syrian children.
Last Update: Feb 24, 2016 11:57 am
RELATED TOPICS