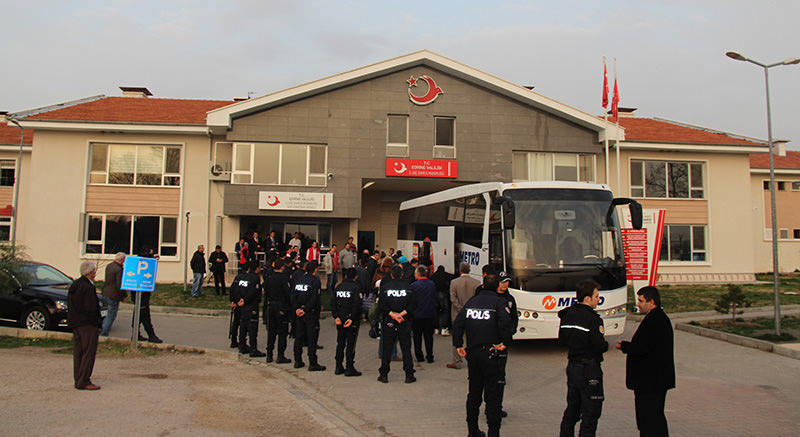 Greek authorities on Tuesday sent a group of refugees who illegally entered the country back to Turkey, as part of the readmission agreement signed between the European Union and Turkey.

According to Anadolu Agency (AA), the Greek border patrol sent 70 refugees, including Moroccans, Tunisians and Algerians to the İpsala border in northwestern Turkey. From there the refugees were reportedly transferred to the Edirne Provincial Immigration Directorate.

On Nov. 29, 2015 the European Union and Turkey agreed on a deal that would provide 3 billion euros to Ankara for Syrian refugees. If Ankara fulfills the requirements of the agreement, the EU Commission will propose visa liberalization for Turkish citizens in October 2016.

A total of 308 migrants are expected to be sent back to Turkey, a Greek government source told the Agence France-Presse (AFP) on Tuesday.

Greece, which has been the gateway to Europe for hundreds of thousands of migrants who have been illegally traveling to the country from Turkey since last year, has tried repeatedly to send people back to Turkey under the 2002 bilateral deal.

As cash-strapped Athens struggles to cope with the massive influx, Greek Prime Minister Alexis Tsipras said in an interview with Star TV on Monday: "If there is no cooperation with Turkey, we cannot get substantial results in reducing the migrant influx."

Foreign Minister Mevlüt Çavuşoğlu is set to visit Athens on Friday, three days ahead of an EU-Turkey summit on the crisis in Brussels.

The Coast Guard is reporting an annual, 11-fold increase in the number of undocumented migrants discovered in the country's Aegean region.

The Coast Guard discovered nearly 8,500 refugees in operations last month, a number that is 11 times higher than the same time last year, officials told Anadolu Agency (AA) on Tuesday. Many of the migrants were trying to reach Greece using rafts and fiberglass boats.

In addition, Turkish authorities reported that 14,000 refugees were found in the first two months of this year. This is in stark contrast to the same time in 2015, when the Coast Guard discovered 5,535 refugees in January and 753 refugees in February. Thirty-seven people have drowned or died from hypothermia off the Turkish Aegean coast in February.

Turkey's Aegean provinces of Çanakkale, Balıkesir, İzmir, Muğla and Aydın are prime spots for refugees leaving for the EU, as many Greek islands lie within sight of the coast.

Over the past year, hundreds of thousands of people have made the short but perilous journey in a bid to reach Northern and Western Europe in search for a better life.

Of the more than 1.1 million migrants who arrived in the EU last year, more than 850,000 arrived by sea to Greece from Turkey, according to the International Organization for Migration and 805 people died on the Aegean Sea in 2015.