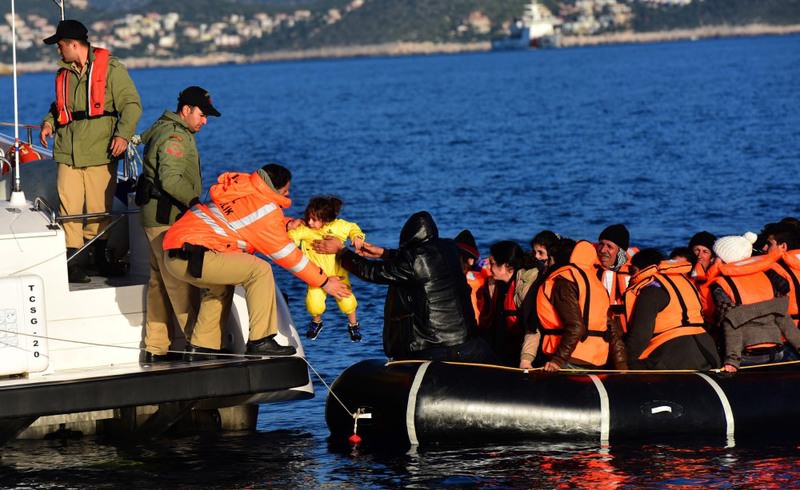 by Daily Sabah with IHA Mar 02, 2016 12:00 am
The Coast Guard, struggling with an incessant flow of illegal migrants heading to Europe, is set to boost its presence along the lengthy Aegean coast, and to speed up the legal process by establishing outposts.

Small outposts made of prefabricated housing units will be constructed on beaches near Çeşme, Dikili, Küçükkuyu and other spots preferred by those smuggling migrants, mainly from Syria, due to their proximity to Greek islands, seen as the main gateway to Europe. Migrants intercepted at sea by the Coast Guard will be directed to these outposts instead of town centers for faster transfer to refugee camps or temporary accommodation centers for illegal migrants.

Turkey is home to a large population of refugees from Iraq and Syria. Syrians make up the majority of refugees staying in Turkey, at more than 2.5 million. A considerable number of migrants aspire to travel to Europe, where asylum seekers are thought to receive generous social benefits.

Bad weather and packed boats make the dangerous maritime journey - the shortest way for undocumented migrants to reach Europe - quite dangerous, yet those forced to choose between living in refugee camps and war zones or a potentially deadly journey often take their chances at sea. The Turkish and Greek Coast Guards patrol the sea around the clock, but a considerable number of migrants - more than 800,000 in 2015 - have succeeded in reaching Greece. The flow of refugees may increase as spring arrives. The United Nations' refugee agency (UNHCR) reported that more than 122,000 people arrived in Greece by sea already in 2016. The Coast Guard, with a staff of more than 5,000, constantly combs the perilous waters of the Aegean, working to cut off smugglers' boats. Reinforcements are sent to migrant hotspots along the Aegean coastline, stretching from Çanakkale in the northwest to Muğla in the southwest.
RELATED TOPICS