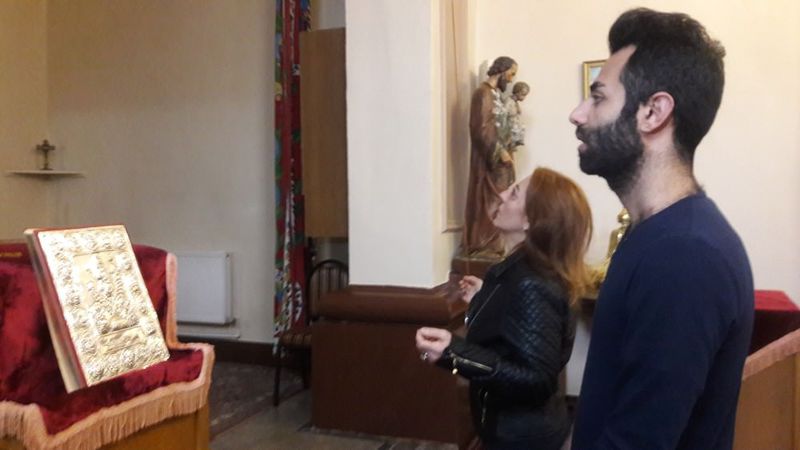 by Daily Sabah with IHA Mar 04, 2016 12:00 am
Their lives shattered by ongoing conflict at home, the Christian Assyrian community of Syria have found safe haven at a small church in Istanbul where fellow faithful embrace them.

The church in Istanbul's Samatya district is run by a foundation of the Assyrian community in Turkey, hosts migrants from Syria who were defrauded by human smugglers along their journey to Europe. Migrants have been offered food and accommodation at the church. They await approval of their asylum requests from European countries, where relatives live.

Families who fled violence perpetrated by DAESH targeting the Christian community in Syria spend their days at the guesthouse of the church, waiting for their visa applications to be approved while a small group looks for ways to sneak into Europe, like their fellow Syrians who board boats bound for Greek islands off Turkey's Aegean coast.

Naaim Lazie, once a businessman running a textile factory in Syria, managed to smuggle his wife and three children to Germany but does not have enough money to pay smugglers, after being defrauded by the first smugglers he contacted. Laazie says he traveled months ago to İzmir, a hot spot for migrants from Syria due to the proximity to the Greek islands, hoping to join others entering Greece from Turkey. He paid 24,000 euros to two groups of smugglers, but the smugglers abandoned the Lazie family on the beach. He finally managed to get his family aboard another boat and family members managed to travel as far as Germany from Greece. "It was a rough journey for them but they made it anyway. I now await them to settle down there and I will travel later," he says, defiant despite his experiences.

Alexy Kazangy similarly paid a large sum to smugglers who promised him a journey to Greece aboard a rubber boat. He paid $1,000 for the journey, but realized he was conned when the smugglers did not show up on the beach. Kazangy has turned to legal procedures, and now awaits approval of his visa application to Germany. "I expect them to facilitate the process for us," he says.

Silva Kurtalan, a church volunteer helping migrants, says the majority of the people they host wanted to cross into Europe illegally, and most guests were women "waiting for their husbands who already made it to Europe to take them."
RELATED TOPICS