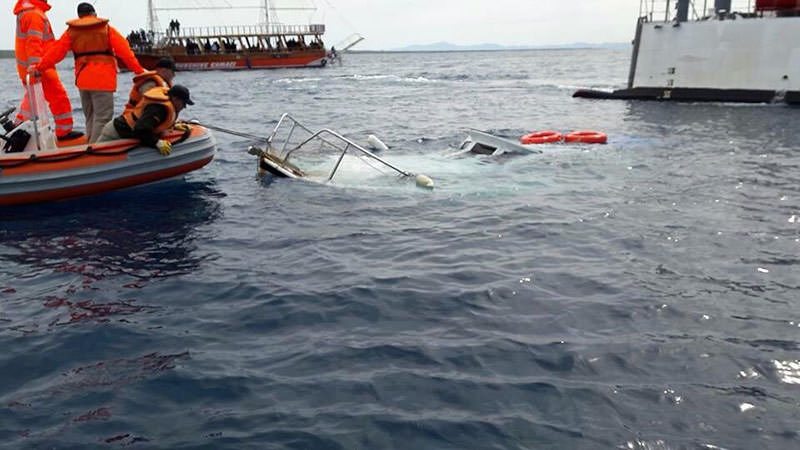 | DHA photo
by Daily Sabah with Wires Mar 06, 2016 12:00 am
25 refugees drowned off Turkey's Aegean coast on Sunday after their boat sank off the western province of Aydın's district of Didim, Anadolu Agency reported.

The Turkish Coast Guard has rescued 15 of the refugees and launched a search and rescue operation to find two other missing refugees with three boats and one helicopter. The total number of refugees is not yet known.

The refugees' nationalities were not immediately released, but they are likely to be Syrians, who comprise the majority of refugees attempting to sneak to the Greek islands from Turkey. Media outlets said three children were among the casualties.

It is not known what caused the boat to sink, although a mix of strong winds and boats carrying passengers over their capacities are often the causes of similar tragedies. The local İhlas News Agency reported that passenger overload was the cause of the disaster.

The last deadly incident concerning the refugees in the Aegean Sea had taken place on Feb. 8 near the Edremit area of the northwestern Turkish province of Balıkesir, in which 27 refugees had lost their lives.

The civil war in Turkey's southern neighbor Syria has made Turkey a favorite destination for Syrian refugees, who use it as a launching pad for journeys to Europe. Most migrants prefer sea routes due to the proximity of Turkey's coast to the Greek islands, but others prefer a land route from the northwest. Turkey is home to more than 2.5 million refugees from Syria where a five-year civil war has displaced millions. Although Turkey has been praised for its exemplary hosting of refugees in camps and humanitarian aid to the displaced, it faces intense pressure by the European Union, which seeks to curb the exodus of refugees from Turkey into Europe.

Although the Aegean route is a shortcut to Europe for migrants, it is also probably the deadliest. Migrants are often forced to travel in shoddy, overcrowded boats and rafts with cheap life vests unable to keep them afloat if their boats sink. Strong winds on the Aegean Sea add to the dangers of the journey, although the onset of spring, which brings less severe winds, is expected to lead to a renewed influx of migrants who mostly stayed away from the beaches in the past months.

Since January, the Coast Guard has intercepted 14,388 illegal migrants on the Aegean Sea and 141 people have died en route to the Greek islands. The International Organization for Migration (IOM) says more than 125,000 people arrived in Greece from the Eastern Mediterranean route, which includes the Aegean Sea, since Jan. 1, 2016. European Union Commissioner for Migration, Home Affairs and Citizenship Dimitris Avramopoulos has said Greece will likely receive another 100,000 migrants by the end of March. "Hundreds are arriving on a daily basis and Greece is expected to receive another 100,000 by the end of the month," Avramopoulos told a conference in Athens on Saturday.

Ankara is in negotiations with the EU on how to tackle the refugee and migrant crisis and Syrian civil war. Ankara has repeatedly called for a resolution to the ongoing conflict in Syria as the only key to end the influx of Syrians into Europe as a long-term solution to the problem rather than debating how many migrants each EU country should take in.