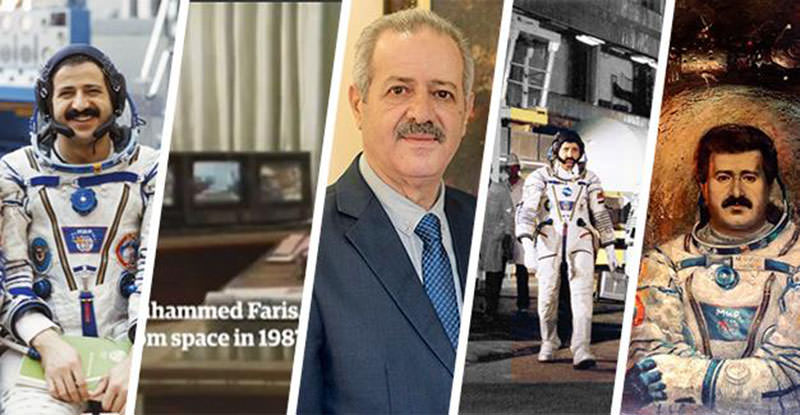 Muhammed Faris was a well-known Syrian hero as he was Syriau2019s first cosmonaut chosen for a team to be sent to space as part of the Soviet Interkosmos Program (DHA)
by Mar 08, 2016 12:00 am

The first Syrian cosmonaut sent to space now lives in Istanbul as a refugee, after fleeing the civil war in Syria with his family in 2012.

Before leaving the war in Syria behind four years ago to live as a refugee in Istanbul's Fatih district, Muhammed Faris was a well-known Syrian hero, as Syria's first cosmonaut, chosen for a team to be sent to space as part of the Soviet Interkosmos Program in 1987. During his mission, he made a speech praising then-president Hafiz al-Assad. Upon his return, he received a "Hero of Syria" medal from the then-president. After teaching at university for 10 years, Faris returned to the army and became a general in 2004. In 2012, he left his country with his family to take refuge in Turkey.

"I have been living in Turkey for four years. The six of us live in a two-bedroom apartment in Kocamustafapaşa [a neighborhood of Istanbul's Fatih district]. I attend conferences to share my experiences," said Faris, who had airports and streets in Syria named after him after he accomplished his space mission. Despite once being wealthy, owning a house and having guards, Faris said all his properties were seized when he left Syria.

"It was a choice. Instead of living there as a 'hero' while my people were suffering, I preferred to live in tough conditions in exile with my honor," Faris said of his decision to move to Turkey.

Working with ex-Syrian president Hafiz Al-Assad and in contact with the country's current president Bashar Al-Assad until 2012, Faris said he was opposed to Assad's methods and had told the regime that the opposition was right in some of its demands. He had participated in meetings organized by the opposition.

"But when the armed conflict started, I realized that a bullet could hit me too. Therefore, I came to Turkey with my family," Faris said, adding that he crossed the Turkish border on foot. "Would I want to live in my country? The last time I saw it [Syria], it was a total ruin," said Faris.

Faris was sent to space as a research cosmonaut with the spacecraft Soyuz TM-3. He spent seven days, 23 hours and eight minutes in space. Upon his return in 1987, he was given the title "Hero of the Soviet Union" and was awarded with the "Medal of Lenin." Although he also speaks Russian, Faris said he rejected Russia's offer to resettle him and his family.

"...I rejected it, because they have also bombed Syria. But my cosmonaut friends, who I went to space with, Alexander Viktorenko and Aleksandr Pavlovich, are like my brothers. When you watch the earth from the same spacecraft, you become like brothers. This is a feeling that clears away all differences," said Faris, adding: "The best view you can have there is the earth. Therefore the most relieving thing for cosmonauts and astronauts is to look at the earth... You look at it just like a baby looks at his mother... And you do not see any borders, no borders, no states, no differences... I wish they could send all bad people on earth to space. I am sure once they return, they would realize how beautiful it is and stop being bad."

Faris also addressed the crisis for Syrian refugees living in Turkey, saying that he was grateful to the Turkish people for opening their doors to Syrians, but added that Syrians should not all be regarded as thieves or beggars.

"In this wave of migration, people from all segments of society are coming [to Turkey]. There are professors as well as ignorant people. But Syrian people generally have occupations. They are not beggars. They would want to earn their money by working and they would work even if the wage is low, as long as Turkey knows how to benefit from these scientists and businessmen with occupations and diplomas. Last year, Turkey's economy grew by four percent. Did the millions of Syrians not contribute to this four percent growth? Turkey has spent millions of Turkish Liras for the Syrians in the camps, and Syrians in the cities are paying back part of this by working," said Faris.