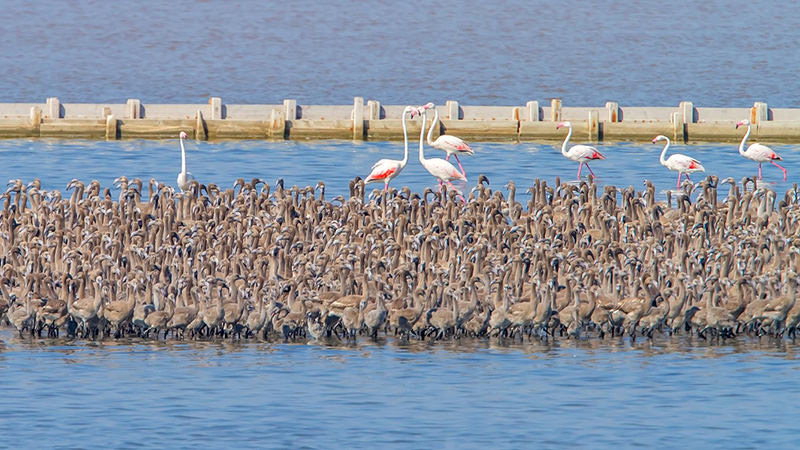 by Daily Sabah with AA Mar 09, 2016 12:00 am
Last year, thousands of baby flamingos were born in Turkey's first artificial island built for their accommodation in Izmir's bird sanctuary.

According to a statement released by the Ministry of Forest and Water Management on Monday, 7,100 baby flamingos were born in the island established in the Gediz River Delta Wetlands located in Turkey's western province of Izmir.

The statement said that the area of the artificial island built by the General Directorate of Nature Conservation on National Parks (DKMP) was increased to 6,440 square meters from the previous 550 square meters to allow more area for the flamingos to settle and mate.

The DKMP provides fresh water especially during arid summer months to protect the wetlands of the delta, while it helps more than 7,000 pairs of flamingos nestle each year.

The world's largest artificial flamingo island was created in Izmir's bird sanctuary in 2012, covering an area of 6,440 square meters.

Artificial flamingos and fake eggs were placed in nests on the island when first opened, hoping to attract flamingos. The initial goal of the flamingo island was to enable up to 12,000 flamingos to incubate there. In 2014, the total population reached about 30,000.

Minister Veysel Eroğlu said that the Gediz River Delta, through its bird species, ecosystem and basin, is a very important area for Turkey.

The Gediz River Delta, a nature reserve that includes Izmir Bird Paradise and salt marshes, is one of the largest wetlands in the Mediterranean and is home to rare bird species as well as an important stop for the flyway of migratory birds. The area is increasingly being surrounded by urban and industrial buildup, and is threatened by growing pollution carried by the Gediz River.

The Salt Lake of Central Anatolia, which provides much of Turkey's salt but currently at risk of drying out, was home to the largest flamingo colony in Turkey and Mediterranean countries, but the area has been losing its reputation as the amount of water evaporating from the lake has been excessive in recent years.