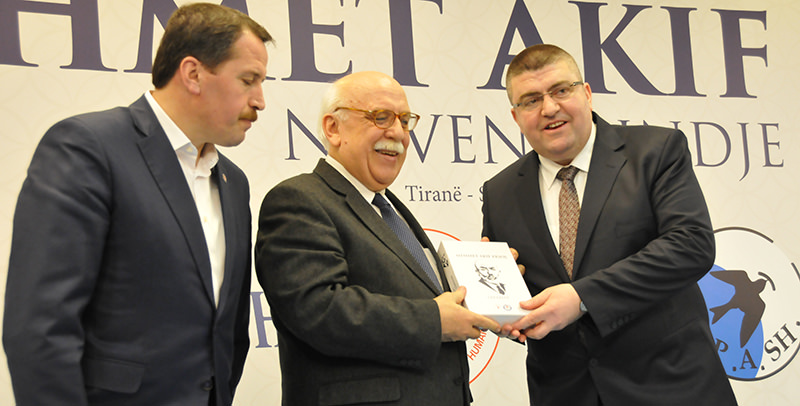 Literary figures, students, and statesmen marked the 95th anniversary of the Turkish national anthem in Albania's capital Tirana on Friday, honoring the memory of its author, the great poet Mehmet Akif Ersoy.

The event was entitled "Mehmet Akif Ersoy International Symposium on the Homeland."

"We have a lot to learn from Mehmet Akif Ersoy. We as a nation have learned from him not to be deterred by challenges, and in any case not to be desperate and how to show dignified resistance," said Avcı.

"The title of national poet suits Mehmet Akif Ersoy very well. I commemorate him with mercy and gratitude."

Turkey's national anthem, the Istiklal Marşı (Independence March), was written in 1921 during the War of Independence as Turkey battled against occupation by foreign forces after World War I, and it was officially adopted on March 12, 1921.

It was penned in order to encourage the fighting army and to motivate the struggling nation. It was also the official anthem of the new republic, which would be founded two years later in 1923.

In addition to being a poet, Ersoy was an author, academic, and member of parliament. He passed away in 1936.

The music for the anthem was composed by Osman Zeki Ungör in 1930.

Ersoy, called in Turkey the "national poet" for authoring the Istiklal Marşı, is also known for his 1911 poetry collection "Safahat". He took the themes for his poems from numerous problems faced by society, as well as from faith-related issues.