Experts volunteer to save non-Muslim architectural heritage in Turkey 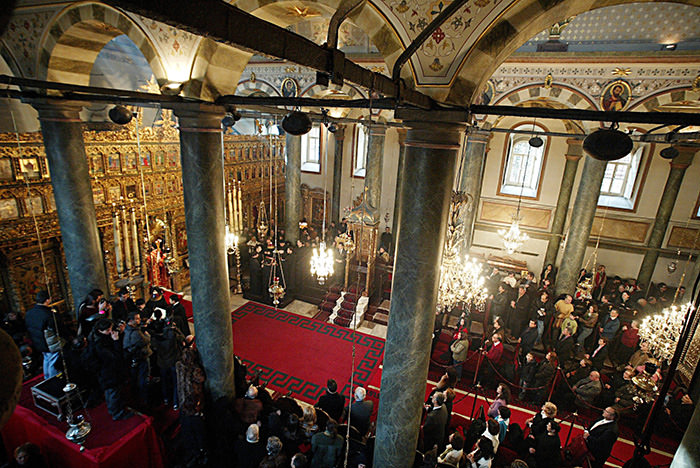 An exciting new project to protect Anatolia's non-Muslim architectural heritage is bringing together volunteers from Turkey, Greece and Armenia.

Well over 100 at-risk churches, schools, monasteries and synagogues will be logged and catalogued by experts from the three nations. Architects, art historians and engineers are reviewing Turkey's Greek, Armenian and Jewish heritage, while the Association for the Protection of Cultural Heritage and Anadolu Culture – two initiatives that support different communities in Turkey – are organizing the project.

Speaking to Anadolu Agency (AA), Çağla Parlak, the project coordinator, said that they aimed to reach an estimated 140 at-risk structures across Turkey where not much work is directly related to non-Muslim cultural heritage, and art historians, architects and engineers knowledgeable about these special structures are lacking. She added that only a couple of people could be called experts in Armenian art history, pointing to the lack of expertise in art history in Turkish restoration projects.

For example, she said when the Culture Ministry, a municipality or governorship conducts a restoration project, often they do not have an Assyrian architect.

"Moreover, budgets for restorations are limited, so with this project we are specifying which structures are in need of primary restoration," she said. The group will document findings from their visits to sites in seven regions across Turkey, including the central Anatolian province of Kayseri, the southern region of Adana and Aegean İzmir.

Financed by the U.S. Embassy in Ankara, the project took a year to come together and ran parallel with the foundation of the association in 2014. The project publicized its first results by publishing a book called "Kayseri: With its Armenian and Greek Cultural Heritage" in February. The team conducted a risk assessment of 18 Greek and Armenian buildings in Kayseri, such as the Surp Asdvadzadzin Church, the Surp Stepanos Church, the Sakis Gumusyan School, the School in Molu and the Agios Georgios Church.

Kayseri, like many other parts of the country, was home to various minorities until the beginning of the 20th century, but their numbers fell during the Republican era.

The year 1915 saw mass relocations that the Armenian population and government describe as genocide, a claim the Turkish government refutes; 1923 saw the population exchange between Turkey and Greece begin; 1942 witnessed the implementation of a "wealth tax" that hit non-Muslim communities and the 1955 Istanbul Pogrom against the Greek community led many minority citizens to leave the country.

According to the new book, which reviews Kayseri's multicultural and socio-economic past, the Armenian population in the city was around 15,000 at the end of the 19th century, while according to local media, today only one Armenian lives there.

The group uses an inventory prepared by the Istanbul-based Hrant Dink Foundation, registration decisions by local heritage protection boards and literature reviews, Parlak said. The Hrant Dink Foundation was named for the Turkish-Armenian journalist assassinated by a Turkish nationalist in front of his Agos newspaper in 2007.

The foundation worked for more than two years making an inventory to gather information about Turkey's cultural heritage. It found more than 10,000 monuments in Turkey, where there are 4,600 Armenian, 4,100 Greek, 650 Assyrian and 300 Jewish structures, according to the research.

The team benefited from the Hrant Dink Foundation's inventory as well as written sources and local historians. Parlak said that nongovernmental organizations were interviewed to identify the sites, adding, "The cooperation between the public sector, civil society and universities was important."

When the group goes to a site, they observe the structure, take photographs and determine GPS coordinates. An inventory form is filled in, and the last part of the documentation consists of a risk report.

According to Parlak: "A scoring system was developed based on the importance or the risk each structure faces. Each structure is ranged according to its risk rating. If a structure is at the top of the list, this means that this building should have priority for restoration in that region."

These reports will eventually be presented to the Culture Ministry. According to the project, the group will organize four trips with local historians and three with international experts. So far the experts have visited Armenian and early Christian buildings in Kayseri, Adana and Jewish cultural heritage as well as Greek and Armenian buildings İzmir. The team will visit Mardin in the south to examine Assyrian heritage at the end of March, and an Assyrian expert from Sweden will join the team. Most structures are public spaces, such as churches, chapels, monasteries and schools, Parlak told Anadolu Agency.

Civil architecture, such as housing, is not added to the risk analysis, she said, adding if an authentic example has been encountered, these structures are reported separately, such as Izmir's cortijos, a type of traditional housing used by Sephardic Jews from Spain. There are buildings that are excluded from the report, Parlak said, such as churches still in use or those turned into a museum or mosque. "Our main aim is to ensure the protection of 'abandoned' structures," she said, adding:

"At the moment this is just in theory. We don't know if our suggestions will be taken seriously."

Parlak is hopeful with regard to the future of cultural heritage in Anatolia: "Last week we were in Kayseri and we visited the governorship, cultural heritage preservation board and municipality. We told them we could support them with experts, and our offer was taken positively."