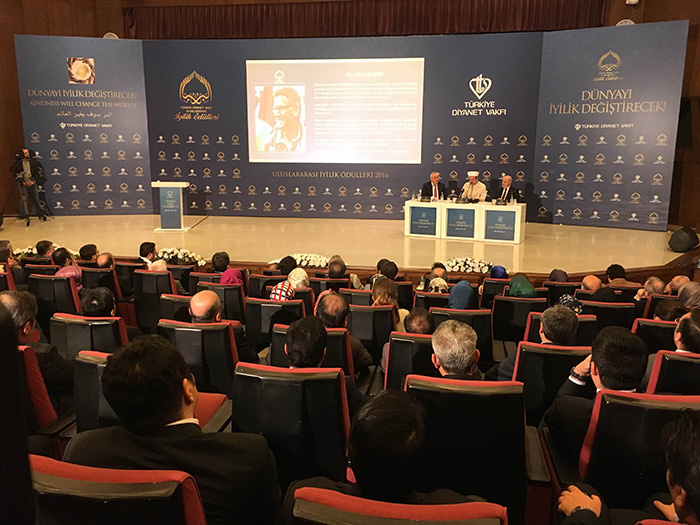 The Presidency of Religious Affairs (DİB) announced the recipients of the 2016 International Benevolence Awards, which will be handed to Turks and foreigners for their good deeds and inspiring the people of the world.

This year's awards, which will be handed out on Sunday, go to a former Sudanese president, a Turkish soldier, an Australian academic and others who were in the spotlight for their stories of benevolence.

Abdel Rahman Swar al-Dahab, a former Sudanese president who heads Munazzamat al-Dawa al-Islamiaa, a non-profit organization active in more than 40 countries in Africa and Asia, was among the recipients of the award. Speaking at an event where the recipients were announced, DİB head Mehmet Görmez said that Dahab, at the age of 81, still continues to "spread goodness" with social aid his organization distributes. "Dahab became a ray of hope, not dimming in the heart of Africa, and helped the people of Africa, especially in providing education for children."

Dr. Susan Carland, an Australian academic, is another recipient. Carland, who converted to Islam at the age of 19, works at Australia's Monash University. Carland hit the headlines last year when she decided to donate $1 for every hate tweet she received. "Her action converted every message of hate into a message of love thanks to her campaign and moved others to help her project," Görmez said.

Jemilah Mahmood, a Malaysian doctor, will also be awarded an International Benevolence Award for her charity work and her active field duty to help the wounded in conflict zones. She is known for providing medical care to women in a Taliban-controlled area in Afghanistan despite threats and helping a woman give birth in Iraq during the war, despite being injured by a bullet.

Dr. Mads Gilbert from Norway was awarded for his work to help Palestinians in Gaza under the Israeli blockade. Gilbert was lauded for his efforts to save lives in Gaza's Shifa hospital in 2009 while an Israeli offensive was underway and Gaza was subject to continuous airstrikes.

The Turkish recipients of the award are Osman Gerem and İsmail Ertem. Gerem is known for his charity work for Syrian refugees the poor population in his hometown of Şanlıurfa in the southeast. Ertem, a soldier in the Turkish Army, made headlines in January when he shielded a police officer injured in an anti-terror operation. Ertem and the police officer survived heavy gunfire and the soldier was lauded for his heroic efforts to protect the officer. Ertem has said he simply acted to protect the officer he was closely acquainted with "because he had children who would miss him if he died."

"Leyla'dan Sonra Hareketi" (After Leyla Movement), an initiative of three Turkish medical students was also awarded for its benevolence. The initiative, named after a terminal patient, is similar to the U.S.-based Make-A-Wish Foundation and fulfills requests of young patients with terminal illnesses.