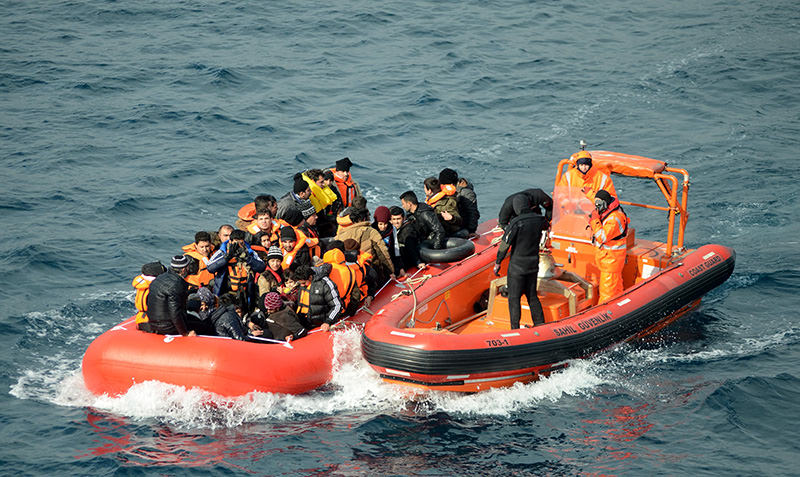 The Turkish Coast Guard Command released a statement on Sunday denouncing reports suggesting one of its vessels was captured on camera while attacking on a migrant boat.

The statement said that following a notice that a boat was illegally carrying migrants was on the move off the coast of the western Dikili district, a Coast Guard boat dispatched on early Saturday to prevent them from crossing the Aegean Sea into Greece.

Noting that the migrants were previously warned to stop the boat, the statement said that the Coast Guard unit used a rope to stop the boat's engine. As these efforts were unfruitful, the unit tried to cut of the fuel hose or break the engine with sticks, it added.

"In order not to risk the migrants' lives, another preventive method of colliding to the boat was not applied. Despite all warning and stopping efforts, the related migrant boat could not be stopped. Maximum attention was applied during the whole process to not to harm the migrants," the statement said.

Camera footage captured by migrants on the boat while the coast guard was trying to stop the boat with sticks was previously released by the British broadcaster BBC, as a reminiscent of earlier cases in the Aegean and Mediterranean in which boats were inflated and migrants were left to their fate.

Meanwhile, 670 illegal migrants were captured while trying to cross the Aegean illegally on Friday and Saturday, the Turkish General Staff said in a separate statement released on Sunday. Accordingly, more than half of those refugees were captured off the coast of Dikili, where the distance between Turkish mainland and Greek island of Lesbos is some 16 kilometers.

Turkey's official broadcaster Anadolu Agency reported that more than 112,000 illegal migrants alone were captured in western province of Çanakkale in the last 14 months with the combined efforts of coast guard, police and gendarmarie units.