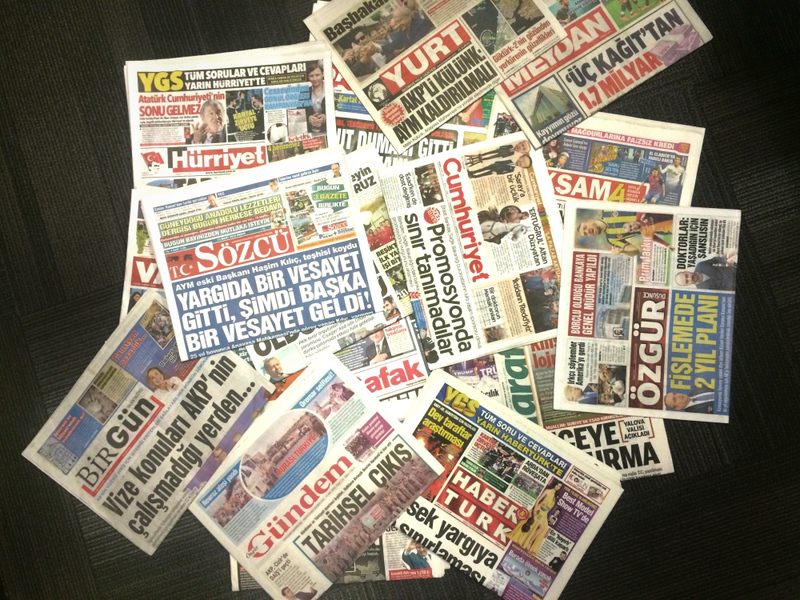 Despite all the talk about pressure on the media, the Turkish press remains robust and is open to a range of voices and outlooks. According to a Turkish Statistical Institute (TurkStat) report, from July 2015, of all newspapers, 89 percent are local, 4.9 percent are regional and 6.2 percent are national.

Currently, there are 45 national newspapers, three of which are football- and sports-related, another three are published in English – Daily Sabah, Hürriyet Daily News and Today's Zaman – and one, Azadiya Welat, in Kurdish. There are 23 regional and 2,381 local newspapers. There are also 27 national, 16 regional and 215 local television channels.

The number of national publications is relatively lower in countries like Germany and the U.K., where the press is ranked "free" by Freedom House.

A look at the most recent circulation records for the week between Feb. 29 and March 6 shows that opposition media outlets take the lead in national publications, with Zaman at the top of the list, followed by the Hürriyet and Posta dailies. While Zaman's daily circulation was 548,333 in this period, Hürriyet's was around 349,000, Posta's 320,000 and Sözcü's was 285,000, totaling 954,000 sales.

According to these figures, the circulation of 38 national publications – with the exception of sports and English or Kurdish papers – is 3,513,896. Nineteen of these publications have an anti-government stance and openly criticize the government while some of them insult, slander and threaten government officials, including President Recep Tayyip Erdoğan, on a daily basis.

More importantly, opposition papers make up around 2 million out of around 3.5 million national publication sales, contrary to claims that media is suppressed.

There are over 250 television channels in the country, 28 of which are national broadcasters. Evening news, which is watched by millions of people daily, could be taken as an example of the critical television channels in the country. For instance, Fox Evening News with Fatih Portakal is watched by 5.65 percent of viewers followed by Kanal D Evening News with 4.18 percent and Show TV at 4.03 percent.

Around 1,000 professional columnists, two-thirds of whom support the opposition, write for these newspapers, and Turkish newspapers publish almost 400 columns, half of which focus on political issues.

A recent survey conducted by the German Marshall Fund says that Zaman, Sözcü and Cumhuriyet are the most biased newspapers in Turkey.

For instance, Sözcü insults the president on a regular basis, uses only his middle name "Tayyip" and calls him a thief, murderer, dictator and other denigrating words. The daily's front page on Jan. 1 featured a word search puzzle titled "Your 2016 Horoscope," saying that the first three names the reader found in the puzzle would be in their life in 2016. The puzzle was intentionally made up with three names, Recep, Tayyip and Erdoğan and one of the lines said "Die Recep."

Turkuvaz Media Group, the parent organization of Daily Sabah that also includes Sabah newspaper, TV channels aHaber and ATV, should be a case in point against the arguments that pro-government press is favored over others. Since December 2013, Turkuvaz Media Group has faced over 600 lawsuits, 80 of them from Fethullah Gülen, the leader of the Gülen Movement.

A total of 340 complaints have been filed for Turkuvaz Media columnists and journalists by the prosecutors' office, 135 of which were filed by Gülen.

The total number of cases that have been filed is over 1,050 and the total amount of damages requested to be paid in these cases is TL 6.215 billion ($2.168 billion).