‘Sadaqah Stone' is back in southeastern Turkey 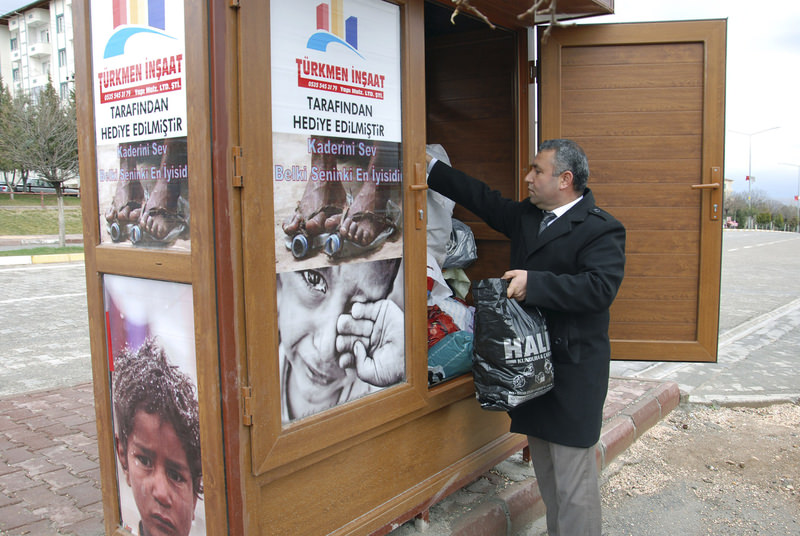 Money boxes have been placed in the most crowded avenues of the district. The aim is to deliver the charity money to those who need financial support and connect philanthropists and those in need.
by Daily Sabah Mar 15, 2016 12:00 am

An Ottoman tradition that aims to help the poor, the sadaqa stone, a container for money and other goods, has been revitalized by the Adıyaman Municipality

The "Sadaqah Stone" tradition, first initiated during Ottoman times in order to create economic balance in social life though charity, has been revived in Adıyaman's Besni district. Municipality officials have set up coin and money boxes on Gaziantep and Atatürk avenues in the district, and will deliver the money collected in these boxes to those who are in need of help. Speaking to Anadolu Agency (AA), Besni Municipality Mayor İbrahim Öztürk said that the municipality has kicked off a charity program in the district called a "need box." Öztürk said that money boxes have been placed in the most crowded avenues of the district, and the charity program has already begun giving fruitful results.

Back in the days of the Ottoman Empire, authorities placed hollowed "Sadaqah Stones" in mosque courtyards and neighborhoods, and people who could afford to put money in these stones to be given to those in need. Those in need would place their hands inside the hollowed stone, and no-one could see whether they were placing money in or taking some out.

Öztürk said the municipality wanted to emphasize the importance of charity. "We are inspired by the Ottoman saying 'The left hand should not see what right hand gives,' and we set up money boxes in various locations in our district to be able to help people who are in need. We also wanted to support charitable events in our district. We want to deliver the charity money to those who need financial support and build a bridge between philanthropists and those in need. People of Besni have once again showed how much they care about charity work."

Öztürk said that those who want to help can give clothing and other things besides money, and assured benefactors that the charity will find its way to people who are in actual need. "Currently, our money boxes and cabinets are full. The belongings and the money will be delivered to the needy after they are sorted out. We also have a coordination unit and a phone number for people who want to donate bigger things that cannot be placed in the cabinets. We will continue to coordinate with our citizens," added Öztürk.