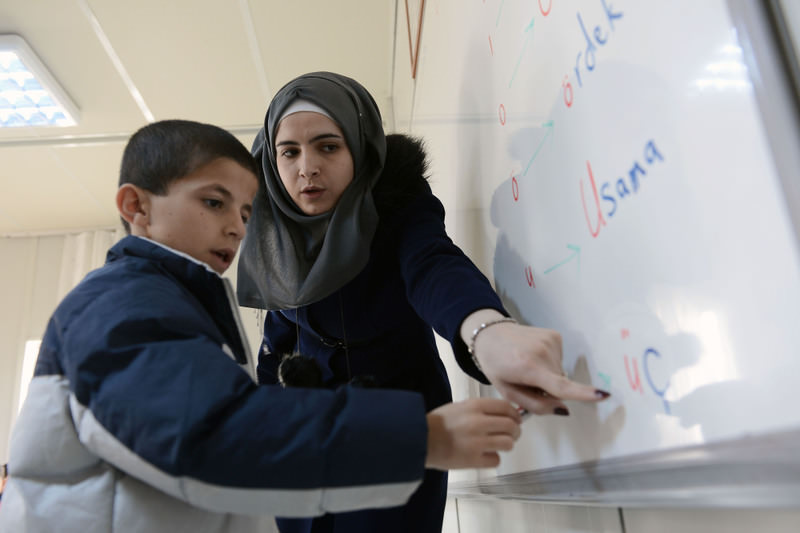 Syrians mark the fifth year of a conflict that continues to ravage their country this month, while Turkey remains among the few countries extending a helping hand to the displaced with exemplary camps and humanitarian aid

Tuesday was the fifth anniversary of a call by Syrian activists for nationwide protests against the Bashar Assad regime. Since then, street protests and a regime crackdown on protests evolved into an all-out conflict with new actors emerging, such as the terrorist organization DAESH. Turkey, the country's northern neighbor, was one of the first countries to open its doors to Syrians displaced by war and sever ties with the brutal Assad regime, which violently suppressed any opposition. Five years on, Turkey still remains the safest haven for refugees who streamed into the country with few possessions, little or no money and no place to call home. Though Lebanon and Jordan, Syria's other neighbors, accepted the displaced, Turkey is lauded by the international community for offering the best accommodation standards to the refugees. Today, 2.7 million refugees from Syria live in Turkey, a figure that was unimaginable when the first group of 252 refugees quietly entered the country in 2011.

Turkey, although seasoned in hosting refugees as a transit country for migrants from Asia and the Middle East heading to Europe, was apparently unprepared when the exodus of the displaced from Syria started. Still, it managed to mobilize quickly, and tent camps established to host the early arrivals were rapidly upgraded to small neighborhoods with proper housing for refugees.

A return to peace is not in sight for Syria any time soon, with Russian support to the regime and rise of DAESH, which remains a serious threat to stability, continuing with little sign of cessation. This means that Turkey, at least in the near future, will not see a return of the refugees it took in as its temporary "guests" who are among more than 11.2 million people who are either internally displaced or were forced to take shelter in neighboring countries from a civil war that has killed hundreds of thousands of people in five years. Thus, Turkey now looks to improve the living conditions of the refugees it hosts.

The Prime Ministry's Disaster and Emergency Management Authority (AFAD) spearheads the efforts to address the needs of refugees. AFAD runs 26 "accommodation centers" for some 280,000 Syrians in cities near the Turkish-Syrian border. AFAD officials released a statement yesterday on the occasion of the conflict's anniversary, and stressed that Turkey currently hosts the highest number of Syrian refugees. Turkish leaders repeatedly call for the international community to do more for refugees, and criticize the meager aid for refugees by other countries. AFAD officials say Turkey alone has spent more than $9 billion for refugees.

Turkey prioritizes the education of Syrian children by striving to get them enrolled in schools. Some 80,000 children at AFAD-run refugee camps attend schools, while 310,000 students from Syria have enrolled at schools outside camps through a project initiated by the National Education Ministry. The country aims to get at least 460,000 children enrolled in schools by the end of this year in a bid to educate the so-called "lost generation" of refugees whose young lives were shattered by the ongoing war. AFAD also reaches out to Syrians past school age by offering lifelong learning classes at camps where they are offered foreign language courses, computer literacy classes and handicraft classes among other subjects. A total of 60,000 Syrians have already completed vocational training courses.

Apart from education, Syrians, either in camps or living on their own outside the camps, benefit from free health services. AFAD officials say healthcare workers served 500,000 inpatients who fled the war since 2011 while 335,000 surgeries were performed. Turkey also hosts 152,000 children born to families who reside in Turkey after fleeing the conflict.

Along with health, education and other basic services, refugees are offered what they yearned for in Syria: Democracy. Refugee camps have their own leaders elected among Syrian refugees, while technical work in the camps are undertaken by Turkish administrators. The camps also have Women's Committees where Syrian women raise awareness among fellow women to thorny issues of polygamy and underage marriage. AFAD received a United Nations award for public services with its "temporary city management system model," which streamlines the administration of refugee camps. Aid for Syrians are not limited to those in Turkey, and AFAD has delivered TL 1.3 billion ($448.4 million) in aid to internally displaced Syrians since 2011. Moreover, thanks to its humanitarian aid efforts, Turkey is elected to host the first World Humanitarian Summit by the U.N. this year. The summit will define global humanitarian aid strategies and policies.

Though the refugee camps, free health services, education opportunities and aid by nongovernmental organizations improve lives of impoverished Syrians taking shelter in the country, a considerable number of refugees in Turkey are still in need of the ability to sustain their lives. Some turn to begging while others take up jobs illegally. The government introduced work permits for Syrians earlier this year to lift refugees out of poverty, and it is expected to at least curb the influx of desperate Syrians to Europe in search of better lives.

Despite an air of uncertainty, Syrians still await good news from home and hope the conflict will end at least before its sixth year. Mustafa Najjar, a 42-year-old refugee living in an AFAD camp in the southern city of Kilis, said he is worried that another year passed with no cessation of the conflict. Najjar told Anadolu Agency (AA) that being away from home is "a pain beyond words." "By God's will, peace will return and we will return home too. The people of Syria have gone through unprecedented suffering. My people either died at sea or had to go through other hardships," he said, recalling hundreds of Syrian refugees who drowned in the Aegean Sea while traveling by boats from the Turkish coast to Greece.

Hassan Hajjaj keeps his hopes afresh for an end to the war. He says he survives on the dream of returning home again one day. Hajjaj is grateful to Turkey for its assistance to refugees, and praised President Recep Tayyip Erdoğan for being the "only person standing with the people of Syria in this process." Hajjaj also told AA they expected Arab countries to do more to end the bloodshed in Syria.

Suheila Agha, a woman who lost her two sons in the Syrian civil war, is thankful to Turkey but added: "There is no place like home." She said she sorely misses Syria. Nusrat Kuro, who hails from Kobane, took shelter in Turkey two years ago. He praised the conditions in the refugee camp but his heart, like fellow Syrians, still beats for his homeland.