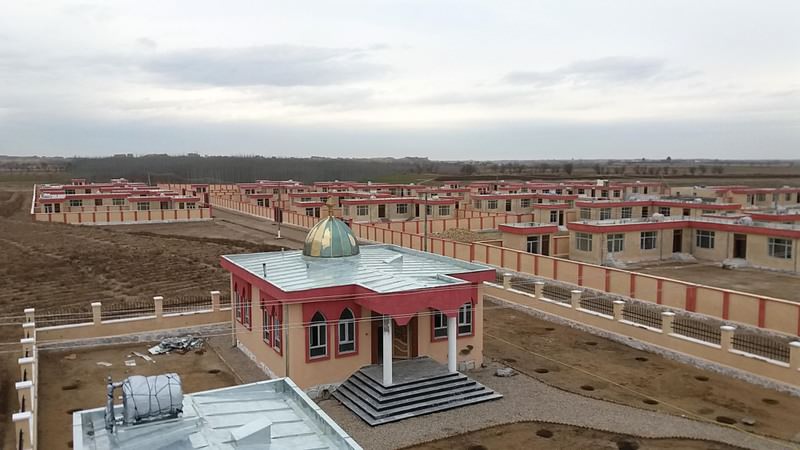 Houses built in Afghanistan for 28 families by Tu0130KA. The agency showcased the project and 52 others it undertook last year as well as those it will launch this year.
by Merve Aydoğan Mar 17, 2016 12:00 am

Seeking to boost Turkey's position in the international community as a leading power in terms of helping other countries develop, the state-run Turkish Cooperation and Coordination Agency (TİKA) Wednesday launched its 2016 schedule for international aid and showcased the projects it completed over the past year

Previously a little-known state apparatus founded with the purpose of helping former Soviet republics after the collapse of the Soviet Union, the state-run Turkish Cooperation and Coordination Agency (TİKA) has re-branded itself in the past decade as a major source for Turkey's international clout by reaching out to people in need across the globe. TİKA showcased 53 projects scheduled to be completed this year as well as projects completed in 2015 at an event in Ankara on Wednesday titled "The Same Signature in Different Geographies." They cover everything from the restoration of a mosque in Thailand and the construction of homes in Sri Lanka, to the construction of a small village in Afghanistan and a stadium in the island nation of Comoros off the eastern coast of Africa.

President Recep Tayyip Erdoğan was among those attending the event in Ankara. Erdoğan said TİKA was one of major contributors to boosting Turkey's place among the countries delivering the most development aid to other countries. "In 2014, Turkey delivered development aid worth $6.5 billion, and aid abroad constitutes more than $2.5 billion of this amount. Turkey was second in this field in 2014 only after the United States," he said. Erdoğan stressed that TİKA focused its activities on education, health and providing potable water. "TİKA made a name in the hearts of millions of people around the world," Erdoğan said, adding that the agency's work was a model for "a Turkish-style development aid," in reference to his past calls for reforms in women's rights and a "Turkish-style" presidency based on Turkish culture and Islam.

At the event, Erdoğan also sent messages to events in Kosovo and Albania where a mosque restored by TİKA and a high school were opened yesterday in ceremonies the president attended via a live video conference. Emin Paşa Mosque in Prizren, Kosovo, an Ottoman-era structure built in 1832, was restored by funds from TİKA after it faced the risk of collapse. Sheh Shamia high school in Shkodra, Albania, is a female-only imam-hatip school or a school offering additional Islamic theology classes.

TİKA is active in 50 countries where it has offices but conducted projects in 140 countries, especially after a revival of its work under the Justice and Development Party (AK Party), which has been in power since 2002.

TİKA President Serdar Çam said at the event in Ankara that TİKA conducts human-centered projects and shares its wealth and experience with the world. Emphasizing that the success of the agency is due to the 14 years of strong will and leadership, Çam said that recent terror attack in Ankara that targeted peace and sustainability would not prevent "our regional and global propitious endeavors."

He said Turkey raised "the voice of conscience" in a world embattled with chaos, poverty and insecurity by a modern approach to development and cooperation, and by a concept of waqf - a type of Islamic charity. Çam said the agency put people at the heart of the projects around the world "to spread goodness, mercy and justice."

Deputy Prime Minister Akdoğan said at the event that TİKA was the success story of Turkey, "not only because it protects the legacy of ancestors of people of Turkey but also for protecting the people sharing an ancestral history with Turkey.' He also stated that Turkey's success story has allowed TİKA to have a stronger and effective success story. Criticizing the opposition parties for claiming that TİKA does not aid Turkic nations, Akdoğan cited the projects that TİKA has done in countries such as Kazakhstan, Mongolia and Turkmenistan and added "wherever our ancestors had travelled and gave a helping hand, we also go to those places."

Akdoğan said that TİKA was an agency that made Turkey proud, particularly with its aid to communities close to the Ottomans in the past.

Among the projects TİKA introduced at yesterday's event was the restoration of a 100-year-old mosque in Bangkok, Thailand. The Bang Uhtit mosque compound also houses a school for Muslim students and acts as a convention center for Thai Muslims. TİKA also restored a 16th century bridge in Bosnia-Herzegovina that was built by renowned Ottoman architect Mimar Sinan. In Sri Lanka, TİKA funded the construction of 100 residences for people displaced by terrorism and provided potable water supplies to residents. In Afghanistan, the agency built houses for 28 families resettled there after their homes were demolished for the restoration of an ancient madrasah. In the Philippines, TİKA supplied medical equipment to a health center in Mindanao, and similarly, it supplied mobile clinics to be used in remote villages of Uzbekistan. Additionally, a hospital was built in the West Bank in the Palestinian Territories. The hospital was the first hospital in Tubas, a small town with a population of 40,000. In Comoros, TİKA built a 2,000-seat stadium as well as a sports facility with running tracks as well as basketball and volleyball courts. In Lebanon, TİKA undertook the restoration of a clock tower in the city of Tripoli where the Ottoman-era structure is viewed as a symbol of the city, and TİKA restored an Ottoman-era mosque in Sudan.