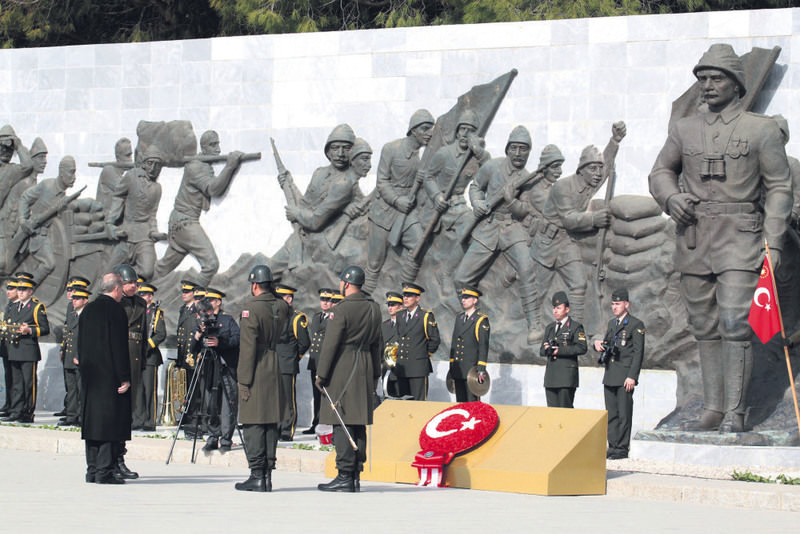 Erdou011fan, accompanied by honor guards, lays a wreath at a monument for the u00c7anakkale dead. Thousands of Ottoman troops died in 1915 in an area near the monument. (IHA Photo)
by Daily Sabah Mar 19, 2016 12:00 am

On Friday, Turkey marked the 101st anniversary of a World War I victory in naval theater of the Battle Gallipoli that sowed the seeds for Turkey's War of Independence, with ceremonies to remember the fallen as well as patriotic celebrations

The victory by Ottoman forces against the Allies during World War I in northwestern Turkey was remembered on Friday during a high-profile event in the province of Çanakkale, where Gelibolu (Gallipoli), the scene of the fierce battle, is located. President Recep Tayyip Erdoğan and other dignitaries attended the event to mark the anniversary of the battle, which inspired Turkey's war of independence.

Events were held all across the country to remember the soldiers who fought the battle, while the large-scale ceremonies held in Çanakkale saw troops parading near a monument in memory of the fallen, along with a parade of Turkish Navy vessels off the shore where soldiers fended off the Allied forces more than a century ago. Turkish Star, the army's aerobatics team, also performed stunts on the occasion.

Speaking at the event before visiting the Martyrs' Monument where he laid wreaths, President Erdoğan said he prayed for the soldiers martyred in the battle, and their parents who accepted the fate of their children on the battlefield. Erdoğan quoted the words of Mustafa Kemal Atatürk, founder of the Republic of Turkey and a commander in Gallipoli, who said the battle was "a struggle which saved the future of Turkey, a struggle that restored the glory of the past and a struggle that made our homeland our own forever." The president said that victory in Çanakkale should be a lesson for schoolchildren, and every schoolchild should visit the battlefield to learn about the battle and the "sacrifices made here."

Erdoğan said the Çanakkale battle was "a saga of resurrection for a nation humiliated at the defeat in the Balkan wars" preceding World War I, which saw the collapse of Ottoman domination in the Balkans. "Çanakkale (victory) sent a message of faith defeating sophisticated combat tactics," he said, referring to the struggle between undermanned and ill-equipped Ottoman troops and the Allied force attacking with modern vessels, modern weaponry and well-armed troops.

The president reminded the contribution of volunteers to the Ottoman army from every corner of the empire, including former Ottomans subjects from the Balkans or from towns such as Bitlis in eastern Turkey, hundreds of kilometers away from Çanakkale, giving a message of unity "for a struggle for existence." Erdoğan said the battle also inspired former dominions of the British Empire such as Australia and New Zealand, where the fighting of ANZAC troops in Gallipoli helped shape the spirit of independence.

The WWI Gallipoli campaign was a major push from Allied forces seeking to control the Dardanelles, the gateway to Istanbul, which was then the capital of the Ottoman Empire, and the Black Sea from the Aegean and Mediterranean Seas. In February 1915, the British and French navies launched a massive attack on the strait, and the primary assault began on March 18, 1915. When battleships failed to seize the strait, the Allies dispatched troops that landed on the Gallipoli Peninsula in April 1915. This campaign failed as well, with heavy casualties sustained on both sides. The Allies' total casualties amounted to 46,000 soldiers and the casualties among Ottoman forces were 65,000, according to Turkish sources, although the exact number of casualties is still unknown.

The fierce campaign was the last major success for the Ottoman army, which was rapidly heading to an inevitable collapse in the midst of the world war, dealing a heavy blow to the already crumbling empire reduced to the current borders of Turkey from a region-wide empire. The victory of the Ottoman army boosted the morale of the empire, and although it did not stop the eventual invasion of the country, it inspired the War of Independence led by Mustafa Kemal Atatürk. A mobilized public taking up arms managed to stave off advancing Greek forces four years after the battle, and Turks finally regained independence after treaties for the withdrawal of invading forces in 1921 and 1923.