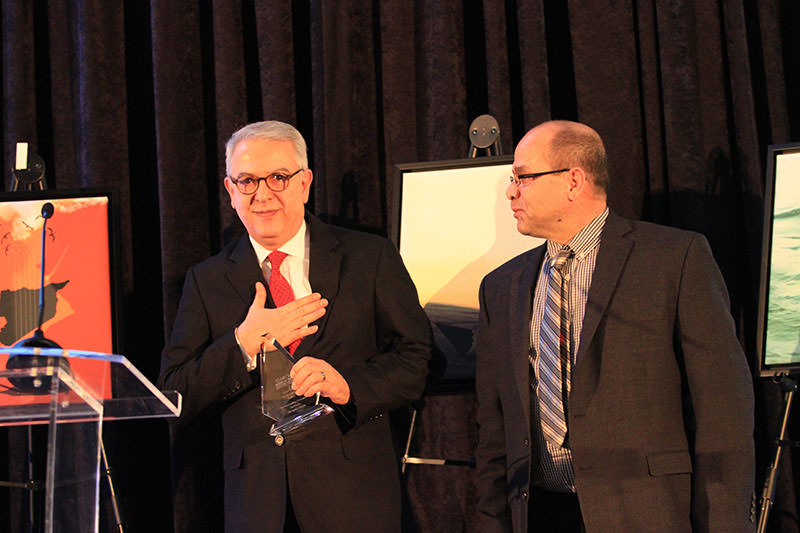 An American humanitarian aid organization awarded Turkey on Saturday night for its "tireless advocacy" for the Syrian people, of whom 2.7 million have been hosted by Turkey over the last five years.

Commemorating the sixth anniversary of the Syrian war, the non-governmental American Relief Coalition for Syria awarded Turkish Ambassador in Washington DC Serdar Kılıç at the organization's third annual dinner, followed by a fundraiser for the Syrian people.

With the message that Turkey's efforts "have not gone unnoticed in the Syrian community", Kılıç was invited to the stage with big applause.

Thanking the organization for the award, Kılıç began his words by noting Saturday's deadly terrorist attack in Istanbul, saying the timing of the award was important for showing the Syrian people's solidarity with Turkey.

Accepting the award on behalf of President Recep Tayyip Erdoğan, Prime Minister Ahmet Davutoğlu, the government, and its people, Kılıç said that above all, he received it on behalf of the 2.7 million refugees in Turkey and especially for Syrian toddler Aylan Kurdi, whose tragic drowning last year helped awaken the international community to the refugee crisis.

"I could have delivered a long speech like my American colleague [U.S. Ambassador to the UN Samantha Power] at New York has done, but I sincerely believe it is time for concrete action, not beautiful words," he said, pointing to Power's 10-minute-plus video message which was shown during the dinner.

Saturday's event was not only about awards but also aimed at raising funds for Syrian refugees worldwide.

"When you write your checks [...] please do not forget that this is not [just] a fundraising event, this is a hope-raising event for the Syrian refugees that have found safe refuge in Turkey, Jordan, and other countries."

The ambassador said it was Turkey's tradition to give hope and safe haven to people from other countries, like the Sephardic Jews who fled Spain to the Ottoman Empire in the 16th century, and that this tradition abided by the Prophet Mohammed's teachings to care for one's neighbor.

Kılıç left the stage to hearty applause from the entire crowd, after leaving the signed first check for the fundraiser on behalf of the Turkish government.

Besides Turkey, the organization also awarded Greece, Canada, Germany, and the U.S. for their efforts for the Syrian people.

Las year, Turkey received another award from the Council on American-Islamic Relations (CAIR), the U.S.' largest Muslim civil rights and advocacy organization, for its humanitarian efforts for Syrian and Iraqi refugees.

Turkey is hosting the largest number of Syrian refugees in the world-2.7 million-and has so far spent around $10 billion for the refugees in Turkey.