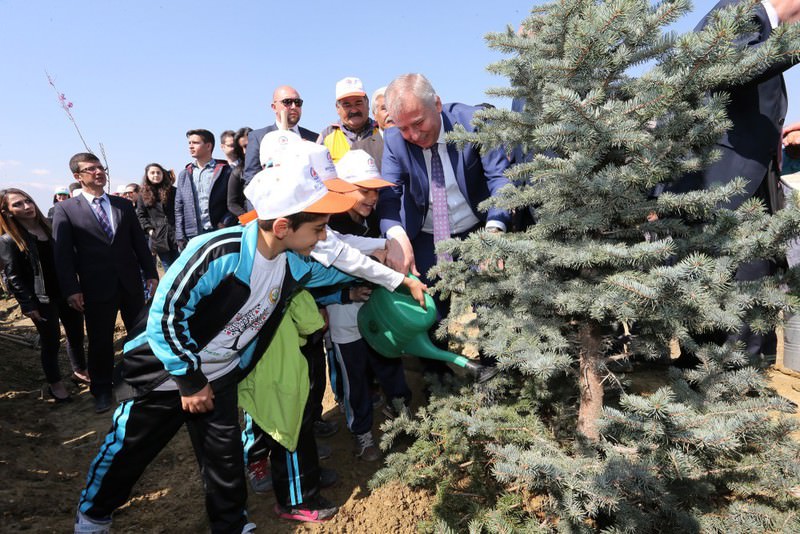 Students and local officials water a tree they planted in the western city of Denizli yesterday. Turkey marked International Day of Forests yesterday through nationwide planting events.
by Compiled from Wire Services Mar 22, 2016 12:00 am

Two major tree-planting projects unveiled Monday will see hundreds of thousands of plane trees planted across the country, which will especially benefit villagers who will have a share of the crops. Additionally, Turkey was included on a list of countries considerably decreasing their greenhouse gas emissions through the expansion of forests

The Forestry and Water Affairs Ministry rolled out two projects on Monday on the occasion of International Forests Day. The project "Year of the Plane Tree" will see 200,000 plane trees planted across the country, while the project "5,000 Forests for 5,000 Villages" will provide extra revenue for villagers who will be offered a share of crops from the trees. Expanding forests in the country's development plan is part of the government's ambitious efforts to preserve the existing ones, restore "decayed" forests and replacing burned or destroyed forests with more trees.

Ministry officials introduced the projects at an event in Istanbul that was also attended by President Recep Tayyip Erdoğan.

The first project aims to re-introduce plane trees, deciduous trees of the Platanus genus which are culturally regarded as a symbol of the Ottoman Empire, and promote the planting of plane trees, especially in urban centers. During the "Year of the Plane Tree" in 2016, 200,000 plane trees will be planted across the country, and half of them will be located in Istanbul where the number of plane trees, once prevalent in the then capital of the Ottoman Empire, decreased over time. Plane trees will also be planted in 10 cities. The London planetree, a hybrid between the oriental planetree and the American sycamore, are considered particularly tolerant of urban conditions.

Through the "5,000 Forests for 5,000 Villages" project, the government aims to encourage development in remote villages by planting forests and fruit orchards in areas. Since only around 10 percent of the entire population live in villages located within forests or near forests, the project also aims to curb migration from villages to cities by offering additional revenues for villagers through the selling of crops such as walnuts, almonds, olives, pine nuts, rose hip, carob, wild pears and thorn apples. Lotteries will determine how trees are allocated to locals, who will pay a small fee for the ownership of the trees for 49 years.

Speaking at the event, Erdoğan said they would "teach how to fish rather than distribute fish" to the public through the forestry projects. He stressed that the proportion of forests to land mass in Turkey was only 27 percent in 2002, and they aimed to make it more than 30 percent in a decade. He also said Turkey had planted 3.5 billion trees over the past decade.

The mass planting of trees and improvement of pastures are among the measures being taken against erosion and desertification, as part of an action plan by the government.

About 500,000 hectares of land turn into deserts every year due to poor irrigation. Officials say Turkey is among the countries most affected by the increase in non-arable lands and climate change, as it sits in a geographically challenging location sandwiched between different climates. More than half of Turkish soil has the characteristics of arid, semi-arid and semi-humid climates. Turkey's central and southeastern regions, known for vast flatlands and steep mountains, are particularly vulnerable to the risk of desertification. Erosion is another threat for Turkey where most lands have an elevation far higher than countries in its immediate region or European countries.

Turkey is ahead of developed countries in terms of greenhouse emissions cuts, according to a National Inventory of Greenhouse Gas Emissions. Forests helped the country see reductions of 51.1 million tons of greenhouse gases in 2015, far more than the amount of reductions in European countries or on other continents. Speaking at a United Nations Framework Convention on Climate Change event in Germany, Professor Yusuf Serengil - an Istanbul University environmental scientist, said it was possible to further protect against climate change by expanding forests. Serengil said half of the forests in Turkey are decaying and divided. Serengil said incentives to the forestry sector, the rejuvenation of decayed forests and the prevention of road construction through forests would help in the fight against greenhouse gas emissions. Serengil said a forest ecosystem is capable of holding the equivalent to 350 tons of carbon dioxide per hectare; thus, 10 hectares of forest may help offset the annual greenhouse gas emissions of industry.