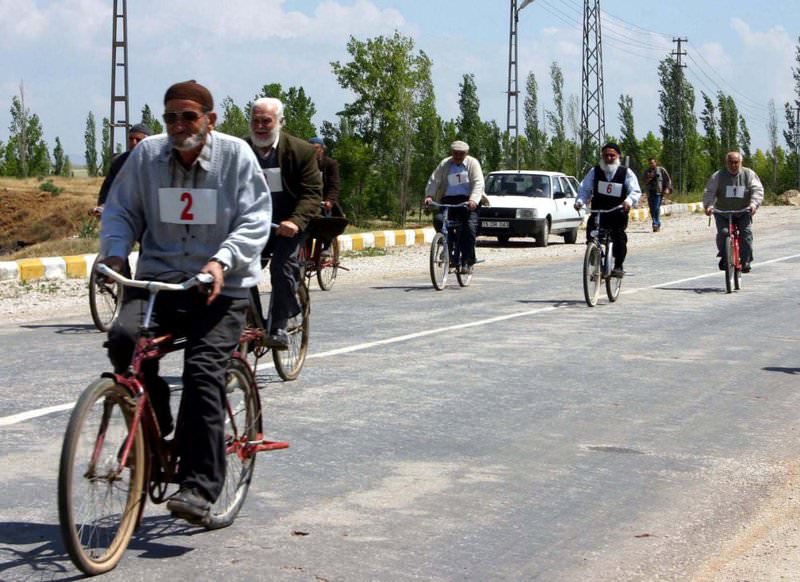 Senior citizens participate in a bicycle race in the western city of Afyon. Elderly people facing risk of terminal diseases are urged to change their nutrition habits and perform exercises regularly.
by Daily Sabah Mar 25, 2016 12:00 am

An official study shows circulatory system diseases, or cardiovascular diseases once again topped the list of causes of death in Turkey last year amid concern for an aging population and sedentary lifestyles

On Thursday, the Turkish Statistical Institute (TurkStat) released their figures for causes of death in 2015. The top three disease groups that claimed the most lives in Turkey in 2014 did not change the following year, and circulatory system diseases or cardiovascular diseases are still the primary cause of deaths in Turkey. Forty percent of deaths were linked to these diseases, with concerns high that unhealthy nutrition habits, sedentary lifestyles and an aging population are contributing to the trend. Neoplasms or abnormal growth-causing cancers came second at 20 percent, showing a slight decrease from 2014 figures, while deaths from respiratory system diseases were 11.1 percent in 2015, up from 10.6 percent in 2014.

Professor Şerefnur Öztürk, head of the Turkish Neurology Association, says bad nutrition habits, a decline in physical activity, obesity and diabetes have all helped the rise in circulatory system diseases. Öztürk told Anadolu Agency (AA) that more people died of those diseases than in traffic accidents. "Risk factors for (circulatory disease) are high blood pressure, high blood fat levels, smoking, alcohol consumption, lack of physical activity, inadequate consumption of fruits and vegetables. A change in people's lifestyles, or at least raising awareness to the dangers such a lifestyle posed, significantly helps prevention of these diseases," Öztürk says.Some experts say the increase in the rate of cardiovascular diseases is tied to the country's rapidly aging population and those diseases would be more prevalent in the near future due to an increase in life expectancy and cases of diabetes. The proportion of Turkey's elderly population from the overall populace rose to 8.2 percent from 8 percent, the latest figures show. The increase comes amid concerns over Ankara's attempts to encourage population growth in the country of 78.7 million people. Turkey hopes to boost its population numbers by offering incentives to larger families, such as longer paid leave and social benefits. Since his tenure as prime minister began, President Recep Tayyip Erdoğan has continued to promote population growth, advocating that families should have at least three children to restore Turkey's population.

Unofficial figures show 71.9 percent of people in Turkey pursue a sedentary lifestyle with minimum physical activity, in a country where 29.3 percent of women and 38.2 percent of men are overweight.

The Health Ministry seeks to combat the phenomenon, encouraging the public to avoid unhealthy snacks and turning to healthier foods as well as routine exercise. The ministry organizes mass walks and promotes the use of bicycles to encourage people to do more physical activity.

Health authorities say migration from rural areas to urban centers has changed people's habits, healthy nutrition and manual labor have been replaced with fast food and office work, making it difficult for people to stay fit given the consumption culture, dishes with high fat content, a lack of regular exercise and dealing with stresses of daily life in the cities.

The latest data from the EU's statistical office highlights that circulatory diseases and cancer are also the main cause of death in EU countries, despite significant drops between 2000 and 2010.

Neoplasms or malign tumors caused more than 76,000 deaths in 2015 according to TurkStat figures, and malign larynx tumors were the leading cause of deaths in this category.

According to the U.N.'s World Cancer Report 2014, new cancer cases worldwide are expected to rise from 14 million to 22 million per year within the next two decades, with annual cancer deaths rising from 8.2 million to 13 million.

TurkStat also looked into cities with a high rate of deaths from cardiovascular diseases. Denizli in western Turkey once again tops the list, followed by Karaman in central Turkey. Last year, malignant tumors were detected mostly in Istanbul, the northern city of Rize and Istanbul's eastern neighbor Kocaeli.
RELATED TOPICS