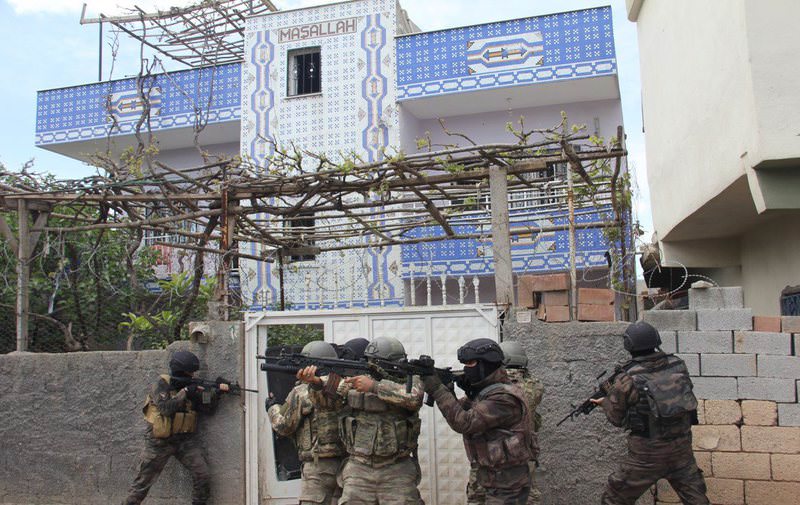 Twelve PKK terrorists have been killed in southeastern Turkey, the country's military said on Saturday.

One soldier was also martyred during an operation in Şırnak province, the security forces added.

According to security sources speaking on condition of anonymity, the soldier was severely injured by PKK terrorists and later succumbed to his wounds in Şırnak Military Hospital.

In a statement, the Turkish General Staff said that two PKK terrorists were "neutralized" in the Nusaybin district of Mardin province on April 1, which increased the total number of the terrorist killed there to 150.

In addition, six terrorists were also killed in Sirnak province where 136 have died so far, the statement said.

In the Yüksekova district of Hakkari province, three terrorists were also killed during operations, bringing the total number killed so far to 113, the army said.

In the Belen district of Hatay province one PKK terrorist was killed and his weapons plus documents were seized, the statement added.

Several other weapons and IEDs were also seized during the operations, the statement added.

A PKK/PYD terrorist who crossed the border from Syria to Turkey's Sanliurfa province surrendered to the authorities, Turkish army said.

Another PKK terrorist was held in Mus province, the statement added.

Tension is high in southeastern Turkey since the PKK-listed as a terrorist organization by the U.S. and the EU-resumed its 30-year armed campaign against Turkey in July 2015.

Since then, over 350 members of the security forces have been martyred and thousands of PKK terrorists killed in operations across Turkey and northern Iraq.

Turkey designates the PYD-the Syrian affiliate of the PKK organization as a terrorist group.