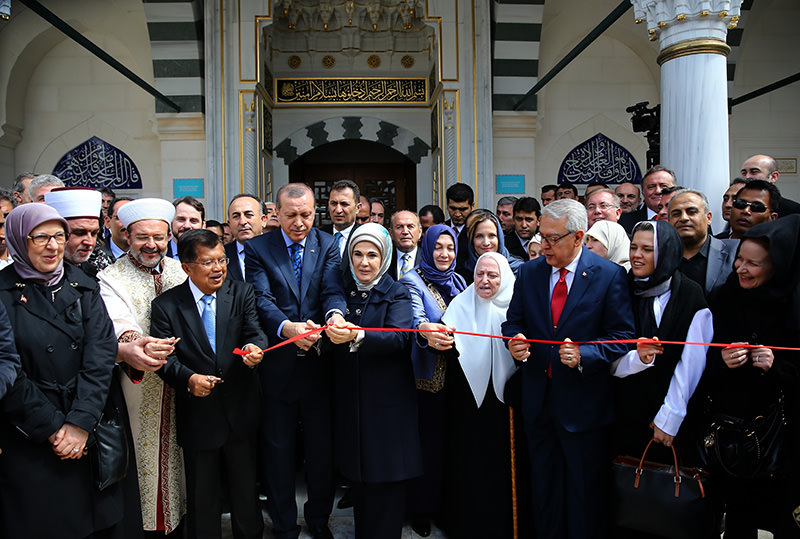 Diyanet Center of America, a Turkish-funded complex containing culture centers and one of the largest mosques in the United States, was inaugurated on Saturday by President Recep Tayyip Erdoğan, who defined the site as a place to serve American Muslims and spread Islam’s message of love and compassion

A few miles away from numerous churches and a Hindu temple, a brand new mosque rises in Lanham, Maryland. The mosque, with its two minarets and majestic dome, is actually part of a larger complex known as the Diyanet Center of America, or as President Recep Tayyip Erdoğan has called it, the Turkish-American Center of Culture and Civilization.

The Turkish President joined Turkish-Americans along with American Muslims hailing from states along the east coast of the country and those from Canada, for the inauguration of the complex on Saturday.

Built by funds from Turkey's state-run Presidency of Religious Affairs, or Diyanet, as well as Turkish-American non-profit organizations, the complex – with conference halls, basketball courts, a restaurant, Turkish bath and a cultural research center – will serve as a social and religious complex or külliye, as such religious/educational compounds were called in Ottoman times. Erdoğan said the complex, built in the Ottoman tradition with touches of Seljuk architecture, would serve both American Muslims and people of other faiths and would promote Islam's message of love and compassion.

Only a half-hour drive from Washington D.C., the complex is an ambitious project Erdoğan personally helped to be realized by instructing Diyanet to build a large compound on the location, rather than a small mosque.

The complex, commonly referred to as "Maryland külliye," as such religious/educational compounds were called in Ottoman times, rises on a lush stretch of land that was once a muddy swamp. Turks living in the area built a small, makeshift mosque in the area before the foundation of the complex was laid in 2013.

It is situated near neighborhoods with predominantly Turkish and Muslim population. Spread across 60 acres, it contains "one of the largest Turkish mosques" built outside Turkey, according to officials.

President Erdoğan said the site where the Diyanet Center of America is was once home to "a small container used as a mosque" where he once attended an iftar dinner during a U.S. visit. "Now it has turned into a center of civilizations," he said, thanking local officials for helping with the construction process, which was "a testimony to an alliance of civilizations." Turkey chairs an Alliance of Civilizations initiative in an effort to fight Islamophobia.

Erdoğan said the mosque, which will have the capacity for a congregation of 750 people, was an architectural beauty. "However it is more important for us what this complex will serve. It will serve to our Muslim brothers and sisters in the United States and will give people spiritual peace. It also has an important task for spreading Islam's values embracing the whole of humanity, and our Prophet's message of love and compassion," Erdoğan added.

The president said this role for the center was important at a time of an "unfortunate rise in intolerance and prejudice towards Muslims in the United States and the world. We have to fight together with Americans of different faiths against our common enemy: hatred and prejudice. We, together with American society, should show the international community the true face of Islam, which advises giving rather than taking, helping neighbors and orders keeping people alive, rather than killing them," he said.

The complex aims to achieve what Erdoğan directed, with cultural and educational activities. Right below the mosque, a small museum of Islamic art was built while the cultural center adjacent to the mosque houses the Center for Islamic Research, which will offer consultation services for university and postgraduate students from Turkey.

Ahsen Dasti, a Muslim among those who attended the opening ceremony, agrees with Erdoğan. "There is a lot of rhetoric (among presidential hopefuls in the United States) that constitute appeals to hate towards Muslims," he told AFP, adding that the center "can definitely build bridges between the different cultures and show what Islam stands for."

Rashad Richardson, a businessman from the state of Indiana, was among the non-Muslims attending the inauguration of the complex. Richardson attended Friday prayers one day before the opening at the mosque.

"I wanted to come out and see and learn as much as I could about cultures, values and not only about the Turkish community but Islam as well," he told Anadolu Agency (AA).

Another guest at the opening ceremony, Daniel Spiro, a coordinator for the Jewish Islamic Dialogue Society of Washington, told AA he enjoyed being in a spiritual environment and praying with others from different faiths. "This is a place for Muslims to come and pray and to learn. But what is particularly important is that we grow the interfaith movement, because that's what will bring us peace."