Maryland complex set to bring Turkish, Islamic touch to US 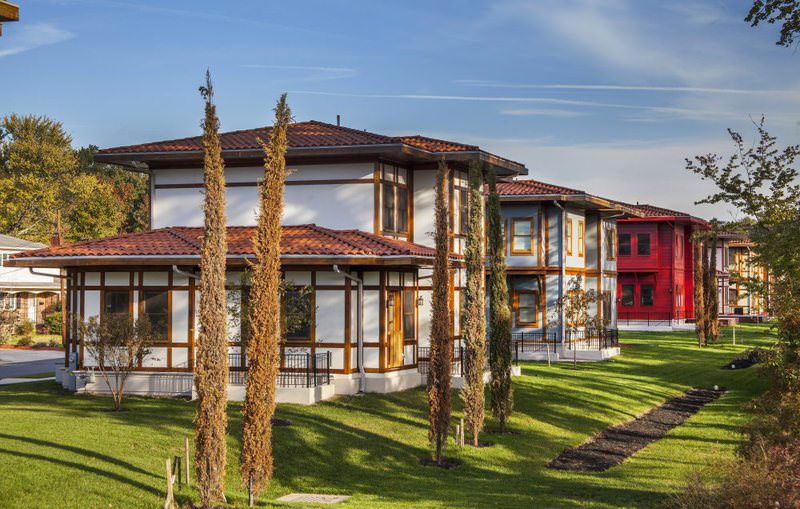 The Diyanet Center of America, an ambitious social and religious complex Turkey built in Maryland, was inaugurated on Saturday in Turkey's latest bid to reach out to Muslim communities in other countries and promote peace

The Diyanet Center of America, a Turkish-funded complex located in a quiet neighborhood in Maryland will be officially unveiled on Saturday by President Recep Tayyip Erdoğan, who has been in the country for nearly one week.

With its distinguished architectural style, which makes the building stand out among other buildings in the area, the Diyanet Center of America is more than a curiosity. Funded by Turks in the United States and the Presidency of Religious Affairs (DİB), the complex houses social and religious buildings built in the fashion of Ottoman and Seljuk architecture.

It is also the latest move by Turkey to reach out to Muslim communities around the world as the country continues to step up its efforts to align itself more with the global Islamic community. Yet, the complex is simply not confined to serve Muslims, as the head of the Presidency of Religious Affairs, Mehmet Görmez, stressed. Görmez, who delivered a Friday sermon in Turkish, Arabic and English at the complex, said it is "a divine metaphysical ground among people of different ethnic and religious backgrounds." Speaking to Anadolu Agency (AA) ahead of the complex's opening, Görmez said the center would also be a reminder to humanity "that the mindset that crafted this beauty cannot be prejudged to produce violence. This mindset only produces peace and beauty. That's the best message to give to Islamophobia." Ankara is among the main advocates of the fight against Islamophobia, which has risen around the world in recent years, especially after the emergence of terrorist organizations promoting their brand of violence as jihad. Erdoğan has repeatedly called on the international community to address "the serious problem" of rising of Islamophobia.

The complex, commonly referred to as "Maryland külliye" in Turkey, after the name given to similar buildings in Ottoman times, rises on a lush stretch of land that was once a muddy swamp. Turks living in the area built a small, makeshift mosque in the area in the past before the foundation of the complex, originally planned to be built earlier, was laid in 2013.

Located some 10 miles from central Washington, D.C., the complex is situated near neighborhoods with a predominantly Turkish and Muslim population. Spread across 60 acres, it contains "one of the largest Turkish mosques" built outside Turkey, according to officials.

Its architect, Hilmi Şenalp, said the building is fully in the tradition of the Ottoman külliye. "Külliye was the basis for Muslim urban development as it combined structures for the religious, social, economic and public health needs of the community with a mosque, madrassa [school], public kitchen, hospital, bathhouses and marketplace. So, we based our design of the site on this concept," he told Sabah newspaper.

Along with the mosque, the compound contains a cultural center modeled after similar ancient Seljuk structures in Turkey, a museum, exhibition halls, a Turkish bath, a guest house, a school and an art gallery.

"The center is important for both the better representation of the Turkish and Muslim community and for addressing the needs of the community here. It is a mixture of traditional Turkish architecture and the American construction experience. It will enrich American history of culture and civilization," Şenalp said. The architect said they brought materials such as wood, china, marble and stones used in the decoration from Turkey, and Turkish artists and construction workers worked on the complex.

"This is not just a mosque, a cultural center or a research center. This is a civilizational center producing true knowledge in its research, culture and art centers. This center is going to have its own unique language and philosophy," Görmez said.
RELATED TOPICS