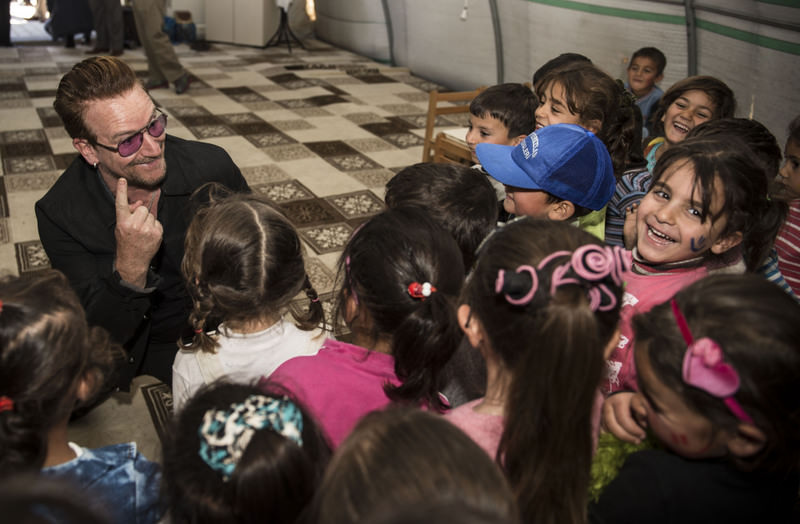 by Daily Sabah with AA Apr 02, 2016 12:00 am
U2 lead singer and philanthropist Bono accompanied a delegation of U.S. senators and congressmen in a visit on Friday to a Syrian refugee camp in southeastern Turkey's Gaziantep province.

The Irish singer sang songs with children attending a school at the camp, after a chorus of children welcomed the group with songs in Arabic.

Speaking to reporters after meeting refugees, Lindsey Graham, on a Middle East tour with fellow politicians, said he thanked the government for their efforts to care for refugees and praised the conditions at the refugee camp. He extolled the high standards in the camp and education services for children, as well as vocational training for Syrian adults and health services. Graham said he and fellow senators would drum up more support for Turkey's efforts in hosting refugees.

Graham likened the war in Syria to a cancer for the Middle East and said he did not believe Washington's strategy to wipe out DAESH would bring results, and that the current strategy has focused merely on weakening DAESH rather than entirely eliminating it. He also voiced support for Turkey's calls for a safe zone within Syria to prevent further flow of refugees to other countries.

In the wake of the Syrian crisis, Turkey managed to mobilize quickly, and tent camps established to host the early arrivals were rapidly upgraded to small neighborhoods with proper housing for refugees.

The Prime Ministry's Disaster and Emergency Management Authority (AFAD) has spearheaded efforts to address the needs of refugees. AFAD runs 26 "accommodation centers" for some 272,000 Syrians, in cities near the Turkish-Syrian border.

Turkish leaders have repeatedly called for the international community to do more for refugees and criticized the meager aid for refugees by other countries. AFAD officials say Turkey alone has spent more than $9 billion for refugees.
Last Update: Apr 03, 2016 1:38 pm
RELATED TOPICS